Big government progressives and collectivists love labels. They seem to come up with a new one almost daily, as they seek to isolate and demonize one small segment of the population at a time that they can identify as “extremist” and then dismiss from any discussion about the country’s direction.

The Department of Homeland Security and the military have, in reports published over the past several years, equated a large segment of the U.S. population with terrorists for simply expressing displeasure of the nation’s course, preparing for disaster or even paying in cash. DHS and the Barack Obama regime are aided in this endeavor by government propaganda arm mainstream media and organizations like the Southern Preposterous Lie Center (aka Southern Poverty Law Center), see here, here andhere.

Now, true to its communistic-sounding roots, DHS is becoming exceedingly fearful of Christians who believe the Bible is God’s word, Christian “fundamentalists” (whatever those are), Americans who believe the country was founded on Godly principles and those who believe the Constitution stands as the law of the land. In training materials, DHS has lumped Christians and Constitutionalists in with a group it calls the sovereign citizen movement and identified them as requiring special surveillance by law enforcement.

In a letter to a conservative blogger, Prowers County (Colo.) Undersheriff Ron Trowbridge revealed what he learned during a recent training course conducted by Colorado State Patrol (CSP) Trooper Joe Kluczynski, a CSP analyst for the Colorado Information Analysis Center, (CIAC). CIAC is funded by DHS and run by the CSP, and the training materials Kluczynski used came from DHS.

Here is the letter, unedited and in its entirety:

On April 1, 2013 I attended training in La Junta, Colorado hosted by the Colorado State Patrol (CSP).  The training was from 12:00 pm to 4:00 pm and covered two topics, Sovereign Citizens, and Outlaw Motorcycle Gangs.  I was pretty familiar with motorcycle gangs but since we often deal with the so-called sovereign citizen groups I was interested to see what they had to say.  The group consisted of police officers, deputies, and CSP troopers.  There were about 20 people in attendance.

While Kluczynski emphasized that sovereign citizens have a right to their beliefs, he was clearly teaching that the groups he had listed should be watched by law enforcement and should be treated with caution because of their potential to assault law enforcement.  Kluczynski explained why he believed these groups were dangerous saying they were angry over the election of a black president.  When someone in the group suggested the failing economy was probably much more to blame, Kluczynski intimated that those who are not going along with the changes in America will need to be controlled by law enforcement.  Kluczynski even later questioned some of the troopers present if they were willing and prepared to confiscate “illegal” weapons if ordered to.

Trowbridge’s boss, Sheriff Jim Faull, issued a news release Monday suggesting CSP suspend and re-evaluate the training program, because: “When an instructor with a state law enforcement agency is teaching their (sic) own employees and other law enforcement agencies that bible (sic) believing citizens and those that do not agree with current political trends are dangerous and should be under the scrutiny of law enforcement, then that agency needs to make some fundamental changes with that particular course.”

Trowbridge said he was surprised and frightened by the amount of attention his letter received, but he stood by it. He issued another letter on Monday responding to those seeking to verify his initial claims. 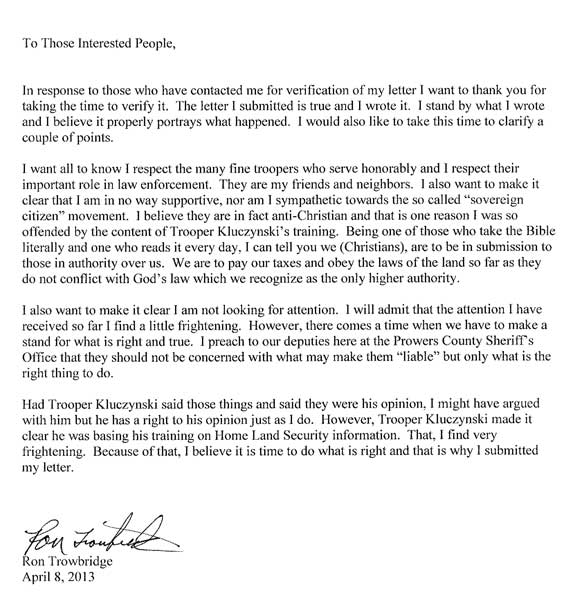 Understand what is at work here is a concerted effort by the regime to marginalize and demonize Americans, “those who are not going along with the changes” the Marxist Obama regime is making to the country. Demonizing and ultimately dehumanizing the “enemy” is a tried and true propaganda tactic. You will also see this tactic demonstrated in the comments posted to Personal Liberty articles by the regime’s messengers, who have taken to equating the Tea Party with the Taliban and calling them extremists and terrorists. It is a designed strategy based on the Saul Alinsky model.

← Society Is Permeated With Sloth, Greed, Envy and Materialism
The Republicans Did It! →