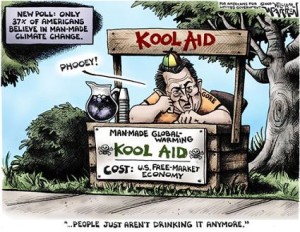 Last year, forty former NASA scientists and astronauts sent a letter to NASA Administration Charles Bolden admonishing him for NASA’s role in advocating a high degree of certainty that man-made CO2 was a major cause of climate change while neglecting empirical evidence that calls the theory into question.  The group  which includes 7 Apollo astronauts and 2 former directors of NASA’s Johnson Space Center in Houston were upset at NASA’s failure to make objective assessment of all available scientific data, charging that NASA is relying too heavily on complex U.N. models that have already been proven inadequate and wrong.   You can read the full text of the letter here.

Dr. Vincent Gray, former U.N. IPCC climate scientists said that “there is currently no evidence that included human based emissions of CO2 or other greenhouse gases have any measurable effect on the climate.”   He further stated that in his view as an expert reviewer of UN IPCC reports that the “IPCC claims are based on estimates of “likelihood” that model “projections” are “possibly true” by the authors themselves. . .who are “paid to supply the models and are therefore “compromised by conflict of interests.”  He also stated that the “assertion that the earth is warming is also without scientific basis since it is impossible to measure the “average” temperature of the earth’s surface and the “Mean Global Surface Temperature Anomaly Record” was riddled with statistical errors. . .”

The scientists organized “the Right Climate Stuff” research team to re-examine the belief that human-generated C02 and other greenhouse gases were creating a global warming crisis and invited a number of scientists, both for and against the global warming theory to study the issue, stipulating that all presentations had to be backed by scientific data.

An initial progress report from the study reports that:

“Because we are not predisposed to believe climate change is caused by human greenhouse gas emissions, we are able to look at evidence the [U.N.-backed] Intergovernmental Panel on Climate Change ignores,” explains the group’s website. “Because we do not work for any governments, we are not biased toward the assumption that greater government activity is necessary.”

You can read the full 21 page progress report in pdf at this link.