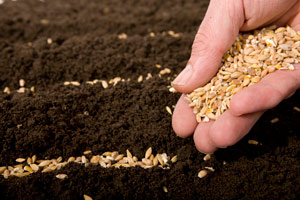 As a result of unfathomable evil, America has witnessed innocent people suffer grave injuries and a precious child lose his life too soon.

After the fact, the question that should be asked is: what went around that resulted in such a horrendous tragedy coming around? What was sown that has resulted in reaping so much heartbreak?

Following the Boston Marathon bombing, Barack Obama mentioned the “full weight of justice” and finding out “why” the “tragedy” took place.  The problem with the “why” is that the truthful answer to that question would likely be rejected by a nation whose egocentric godlessness may have contributed to the evil sprouting up all around us.

The better question is: could the death and destruction we’re experiencing be a direct result of beckoning murder and iniquity into our midst?

Over the last 40 years, a gruesome procedure called abortion has snatched 60 million human beings from the womb, and the harsh truth is that the decision to do so has certainly plowed the fallow ground and sown the seeds of death.  That sowing has resulted in an alarming yield of misfortune, or in the more familiar vernacular, what’s gone around has come around.

Terrorism, by definition, involves an element of surprise coupled with extreme violence being visited upon the vulnerable.  Terrorism is cruel, cowardly, and driven by a religious fervor that is based on the belief that certain people are unworthy of life.

Abortion is similar.  A developing baby resides within the safety of the womb, which certainly should be safer than the sidelines at a marathon, but it’s not.  Then, without warning, the terror of burning and dismembering is inflicted upon a tiny defenseless body by a cruel outside force.

Therefore, it may be fair to say that those who wage jihad against America are simply exercising the “right to choose” on infidels that they view as less than human. Which is exactly how our laws currently view the unborn.

Radical Islamists interpret the Quran to mean that Allah commands them to “Slay the unbelievers wherever [they] find them (2:191).”

In like manner, pro-choice liberals interpret the due process clause of the 14th Amendment to mean that the right to privacy gives women permission to slaughter their offspring.  The belief systems of the two are vastly different, but the dedication to and the justification for destroying human life are extraordinarily similar.

The difference is that the American crusade is legal, sanitized, and insidious.

The day our nation elevated abortion above the sanctity of God-given life, whether we acknowledge it or not, both the guilty and the innocent were placed in a position of extreme vulnerability.  Unbeknownst to us, Roe v. Wade and subsequent anti-life liberal arguments have made each American a prospective victim of what Job described when he said “According to what I have seen, those who plow iniquity and those who sow trouble harvest it.”

Yet after heartily promoting evil and propagating distress, when those forces manifest themselves without warning on sunny Monday afternoons, the nation is astonished and the president asks “Why?”

Americans watched in horror as a small child innocently standing on a metal barricade near the finish line of a marathon was deprived of life by individuals who, in the name of Allah, systematically made their way to Boylston Street with the malicious intent to indiscriminately slay infidels they deemed ‘less than human.’

Tamerlan and Dzhokhar Tsarnaev accomplished the goal they set out to fulfill and, without the burden of conscience, left in their wake unimaginable destruction and an innocent eight-year-old child lying dead in the street.

On April 15th progressive Bostonians, most of whom voted for the most prochoice president in the history of America, became the unfortunate victims of an ideology similar to the one they implicitly condoned when they helped reelect Barack Obama. The sad thing is that in the hours following the bombings, as Bostonians waved flags, sang patriotic songs, and applauded law enforcement for apprehending a fiend, in clinics all across America there was no moratorium on the relentless jihad against the unborn.

And while America celebrates the demise of the Marathon Bombers, and well we should, to date, there has been neither a celebration, nor a public sigh of relief that Dr. Kermit Gosnell’s reign of terror may be coming to an end.

Instead, those who suffer, as well as a nation that grieves for them, seem stunned that the evil we approve of under different circumstances exists in venues we’d rather it didn’t.  What is sadder still is that it’s doubtful that those who need to will grasp the concept that wickedness has befallen us because we welcomed it in.

On the day of the Boston Marathon, Americans legally destroyed many more children than the irreplaceable little boy cut down near the finish line.

Therefore, when “what goes around comes around” again, as a nation none of us will be exempted from reaping a harvest of sorrow from the seeds of malevolence we have sown, knowingly or not.