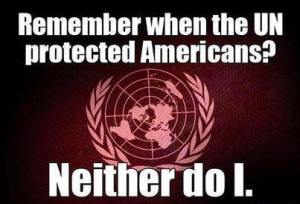 Elections have consequences.  One of the consequences of the 2012 election is that Obama has created a permanent danger to the U.S. Constitution – a danger that will persist long after he leaves office.

The morning after Obama was re-elected, the U.S. delegation at the U.N. voted in favor of the negotiation of a new Arms Trade Treaty.  The treaty was negotiated in March and approved by the U.N. General Assembly in a 154-3 vote on April 3.  Obama has announced that he will sign the new treaty on June 3, signaling that he is willing to have foreign governments remake our country in their image.

Once Obama puts his signature on the treaty, it will be up to the U.S. Senate to ratify with a two-thirds majority, before it becomes binding law.  Chances for ratification – at this time – are iffy.

During the budget debates in March, the Senate voted 53-46 in favor of a resolution giving the chair of the Senate Budget Committee the discretion to reallocate funds to prevent the  US from entering into the treaty.  At this point, the Budget Committee chair is held by “I Hate Guns” Senator Patty Murray of Washington and she isn’t up for re-election until 2016.

Without a clear two-thirds majority vote, the Senate can sit on this treaty for years or until such time as another nut goes on a shooting rampage.  When that happens, and it will, the Senate will  quickly ratify the treaty.

Don’t believe the liberal slant that this treaty is not a deterrent to our 2nd Amendment.  The treaty preamble declares itself to be “mindful of” the legitimate use of firearms for “recreational, cultural, historical, and sporting activities, where permitted or protected by law.”   But understand that  a preamble is only an introductory statement to explain the treaty’s purpose and underlying philosophy – it is not a guarantee.   Totally missing from the body of the treaty is language that acknowledges the most important purpose of gun ownership – resistance to tyranny.

If ratified,  the U.S. government will be required to create a “national control list” of arms and ammunition imports and exports, along with the name of the “end-user” (buyer), which is nothing but  liberal speak for a “national gun owner database”.  This database must be given to the United Nations who, in turn, will distribute the list to every member country and the “public.”

The Arms Treaty  goes further than just limiting imports and exports of firearms – it also covers “components” for firearms and ammunition which means that even those gun manufacturers within the U.S. could be put out of business, unable to import foreign materials such as titanium and chromium.

While in theory, everyone is supposed to pay attention to international law; in practice, the only governments that actually do so are those in Europe and North America.

Many of those nations that will ratify this treaty do not  even see it as impediment to supplying arms to terrorists or  terrorist nations.  The highly corrupt regimes of Kenya, Rwanda, and South Africa, spoke about the “moral imperative” for an Arms Treaty even though these same regimes have facilitated arms smuggling to warlords.  Russia, China and India, countries that supply the largest number of arms to human rights violators, adopted a position of neutrality on the treaty and as long as they do not ratify it, they don’t even have to pretend to obey it, thus enabling them to continue to supply weapons to tyrants.   The Communist regime in  Nicaragua announced its “stringent and implacable” plan to disarm citizens, stating that this U.N. Arms treaty was part of its plan.

This treaty also supplies the pretext for some mid-level bureaucrat in some European government to deny firearm export licenses to the U.S. and Israel –  Israel because they are constantly accused of violating the rights of terrorists trying to annihilate them  –  the U.S. because the UN Human Rights Council has already declared that allowing police or civilians to use guns against non-lethal attackers (rapists, arsonists, burglars, armed robbers, carjackers, etc.) is a violation of international human rights law.

The U.N. Arms Treaty also has a built-in mechanism for becoming progressively more onerous.  A “Conference of State Parties” aided and abetted by U.N. staff will guide the implementation of the treaty in every country where it is ratified and, after  six years, the treaty can be amended by three-quarters of those “parties” to include pretty much whatever they want.

Senator James Inhofe, R-OK said that “The U.N. Arms Trade Treaty. . . would  require the United States to implement gun-control legislation as required by  the treaty, which could supersede the laws our elected officials have already  put into place.  It’s time the  Obama administration recognizes it is already a non-starter, and Americans will  not stand for internationalists limiting and infringing upon their  Constitutional rights.”

Democratic Sen. Max Baucus, of Montana, also said he could not support the  treaty, claiming it doesn’t do enough to “uphold the rights of  Americans.”

In an ideal world, the Senate would never ratify the treaty and a future pro-Constitution American president would “unsign” it.  But even then, there will still be an international Arms treaty thanks to Obama.  It will be a permanent danger to U.S. arms imports and a permanent pretext for domestic gun control, under the theory that American laws should be interpreted and applied to conform with international law.