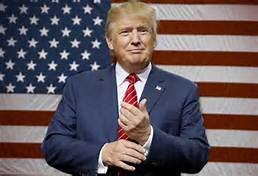 U.S. President Donald Trump’s unprecedented election to the White House goes way beyond the policies of this administration and politicians, David Rubin, terrorism expert and founder of the Shiloh Israel Children’s Fund, former mayor of the Biblical town of Shiloh in Samaria, told Breaking Israel News recently, with the American people choosing a new direction that has profound ramifications for Israel.

Many lovers of God’s word and the Holy Land spent the Obama years pained at the Presidential coldness towards Israel, which upended the warm relationship that the two countries had enjoyed in previous administrations. Presently, those who care about Israel pray that a more supportive leadership now resides in Washington, D.C.

“The epoch grassroots movement that determined the U.S. election illustrates the impact that ordinary people can have when they are active and involved,” Rubin said. “Though the Obama years hurt Israel’s security and status in the world, much was accomplished by friends of Israel during that difficult period. Many friends of Israel at the grassroots levels were motivated and activated by what they perceived as a rupture in the U.S.-Israel relationship and decided to partner directly with Israel.”

Rubin believes that the time is ripe for anyone who cares about the Biblical heartland to bring their support to a higher level. “At President Trump’s inauguration speech he boldly spoke about radical Islamic terrorism, something Obama refused to do,” continued Rubin. “I was personally wounded by Islamic terrorists, along with my three-year-old son, in a particularly vicious terrorist attack in Israel. I know that the best response to this evil is to build a strong future for the children of Israel.”

President Trump declared in his inauguration speech, “We will reinforce old alliances and form new ones, and unite the civilized world against radical Islamic terrorism, which we will eradicate completely from the face of the earth.”

Rubin pointed out to Breaking Israel News that establishing the Shiloh Israel Children’s Fund was a grassroots effort which has changed the lives of thousands of children and families who have been traumatized by terror. “I established the organization with the support of ordinary folks who wanted to strengthen Israel’s Biblical heartland and who care about Israel’s children.”

The Shiloh Israel Children’s Fund established programs to heal the trauma of terrorism in children by using various art, music, animals and horses, play and drama therapies. It also supports the rebuilding of the Biblical heartland through educational programs, supporting summer camps and building parks and playgrounds throughout the Samaria region, and founded the first high school in 3,300 years to be built in Israel’s ancient capital of Shiloh.

“It is our duty to create and maintain youth programs in this area which has faced disproportionate terror, loss and devastation,” expressed Rubin. “Children deserve to have some childhood innocence that was stripped from them restored.”

Presently, the Shiloh Israel Children’s Fund is gifting supporters with a beautiful “I STAND WITH ISRAEL” bumper sticker. “Even if you can’t yet come up to Israel, there are many ways to stand with the Holy Land from a geographic distance,” noted Rubin. “Friends of Israel can proudly place this bumper sticker on their car and support our life-changing projects.”

← The Age of Ignorance
It’s Time To Curb The Court →