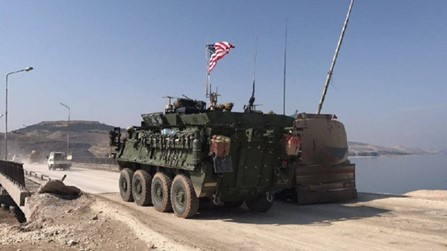 Although the Syrian army, with its ally Russia, has made significant gains against ISIS over the past week or so, the Washington Post is reporting tonight that President Trump has for the first time sent regular US military personnel into that country in combat positions. This is an unprecedented escalation of US involvement in the Syrian war and it comes without Congressional authorization, without UN authorization, and without the authorization of the government of Syria. In short it is three ways illegal.

According to the Post, US Marines have departed their ships in the Mediterranean and have established an outpost on Syrian soil from where they will fire artillery toward the ISIS “headquarters” of Raqqa. The Post continues:

The Marines on the ground include part of an artillery battery that can fire powerful 155-millimeter shells from M777 Howitzers, two officials said, speaking on the condition of anonymity because of the sensitivity of the deployment. The expeditionary unit’s ground force, Battalion Landing Team 1st Battalion, 4th Marines, will man the guns and deliver fire support for U.S.-backed local forces who are preparing an assault on the city. Additional infantrymen from the unit are likely to provide security.

On March 5th, RT ran footage of a US military convoy entering Syria near Manbij. The US mainstream media initially blacked out the story, but the Post today confirmed that the troops were from the Army’s 75th Ranger Regiment in Stryker vehicles.

What is important to understand about this sudden escalation of US involvement is that if this “race to Raqqa” is won by the US military rather than by Syrian government forces, the chance that the US will hand the territory back to the Assad government is virtually nil. In other words, this is an operation far less about wiping ISIS out from eastern Syria and much more about the United States carving out eastern Syria as a permanent outpost from where it can, for example, continue the original neocon/Israeli/Saudi plan for “regime change” in Syria.

The United States is making a military bid for a very large chunk of sovereign Syrian territory. Something even Obama with his extraordinarily reckless Middle East policy would not dare to do.

Make no mistake: this is big news. And very bad news.