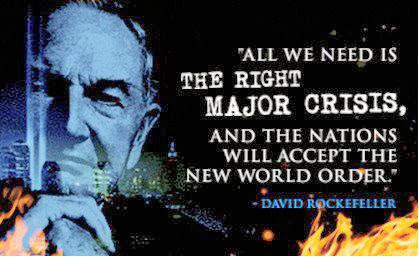 Those who study your Bibles will immediately see the end times being played out.

From war to peace and how to implement it was ordered by JFK in 1961 and was concluded in 1966. Instructed never to release the report by then President Johnson, due to the nature of the conclusions reached. Calling it a hoax by the elite establishment, the report was leaked to and published by the Dial Press in 1967.

Iron Mt., a dangerous covert agenda was how to bring the entire world under the United Nations control; a One World Government.

We now see this agenda being implemented on Americans without their knowledge or their consent. America is rapidly becoming a Fascist Police State: merging into a Federal Police State; a Multijurisdictional Task Force (MJTF).

The Iron Mt. agenda has no regard for life, morality, or religion; setting the stage for the anti-Christ.

Over two thousand years ago, Jesus warned that in the latter days these things would and must come to pass  before his return.

George Bush Administration Dec.11,1989: “I have today signed HR1495, the “Arms Control and Disarmament Amendments of 1989″, authorizing control programs for fiscal years 1990-1991. I believe however, that one section of HR1495 must be carefully construed to avoid constitutional concerns.”

This treasonous document circumvents the Constitution not only to disarm us, but to enslave us in a Communist dictatorship by the UN. The Elite are desperate for control and they look at all people as cattle to be herded. 911, the invasion of Iraq, the Arab spring, open borders and the Muslim invasion have all happened for a reason……their plan to keep you from focusing on their true agenda; A New World Order. A world order which reduces all humans to non-entities without rights granted by our Creator.  This New World Order is Babylon; trading in the souls of men.

Iron Mt. states that war, which is referred to as a necessary waste, is required. Why? So people will cry peace, peace and be willing to give up all their rights and freedoms to obtain it. The elimination of war implies the elimination of national sovereignty and the traditional nation-state.

“A substitute for the war system must be found in order to control the people and provide stability and legitimacy of government if we go into an era of peace. Obviously, if the war machine is discarded, new political machinery would be needed at once…………….”

What could substitute for war? This is what Iron Mt. offers:

You were forewarned through our Fathers word what would occur in the latter days. I suggest you read your Bibles, then read Iron Mountain. It is happening for all to see, yet most won’t, or chose not to.