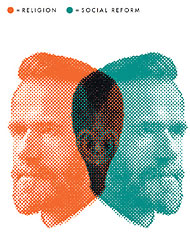 Would you knowingly join, attend, support, or allow your children to be indoctrinated in a church that promotes moral equivalency to all forms of global spirituality; that focuses on creation of an earthly utopia; that stresses consensus “Christianity” over Bible authority; that is critical of capitalism; that likens patriotism to racism; that teaches the U.S. is the number one source of international poverty; that promotes a revolutionary socialism; that believes the United Nations and international courts should override America’s Constitution; or that works toward a one-world religion that encompasses all gods?

If you belong to a church that is a member of the National Council of Churches or the World Council of Churches, it is a strong possibility that this is exactly what you are supporting.   There are over 100,000 local congregations and over 45 million Christians that contribute well over $40 billion a year to these organizations that promote leftist doctrine.

Walter Rauschenbusch, the father of the Social Gospel, was born in Rochester, NY, to a German ordained Lutheran minister.  Receiving his education in both Germany and America, Rauschenbusch attended the University of Rochester and Rochester Theological Seminary.  Pushing a philosophy called Illuminism, a belief in personal enlightenment that substitutes faith in man over faith in God, in 1892 Rauschenbusch organized a group that called themselves “The Brotherhood of the Kingdom” to promote their radical beliefs along Fabian Socialist lines.  Even Karl Marx noted that Illuminism was nothing more than Marxism.

Believing that if socialism was ever to succeed it must start with the Church, Rauschenbusch joined the faculty of Rochester Theological Seminary in 1897 to spread his brand of theology for the transformation of life on earth into the harmony of a socialist heaven.  He introduced Christ to his students “not as one who would come to save sinners but as one who had a social passion for society.”  From this platform, he wrote numerous books such as “Christianizing the Social Order” and “Theology for the Social Gospel.”

Those ministers that joined Raouschenbusch’s socialist form of theology were Protestant clergymen who objected to the harsh realities of the late 19th Century and sought to highlight the role of man as his brother’s keeper.  (Sound familiar).   They found influence for this new radical socialist gospel from  German “Higher Criticism” which argued against the Bible as literally true and for Charles Darwin’s “Origin of the Species.”   For some, especially Eugenicists, Darwinism was not just biology – it was an ideology that argued for the survival of the fittest and the destruction of those deemed unfit.

Washington Gladden, a Congregational Minister, is thought to be the founder of the Social Gospel.  He helped to popularize modernist views in his books, “Who Wrote The Bible,” and “Social Salvation.”  Gladden was a leading member of the Progressive Movement and preached the need to adopt Protestant theology to the new developments in Biblical criticism and natural sciences.  By the time of his death in 1918, Gladden was one of the leading spokesman for Liberal Protestantism and the Social Gospel.  He was heavily influenced in his beliefs by the writings of Horace Bushnell, another Congregational Minister, who was critical of the conception of the Trinity, the atonement, conversion and the relations of the natural and the supernatural.  In “Christ In Theology” he argued that spiritual truth can be expressed only in poetical language, concluding that an adequate dogmatic theology can not exist.

Josiah Strong, a Protestant Clergy, Eugenicists, and friend of Theodore Roosevelt, preached the Social Gospel through the veil of a world mission intertwined with the theory of race supremacy.    Vida Dutton Scudder, a Fabian socialist, Lesbian and Marxist described herself as a class conscious revolutionary socialist.  She was immersed in Anglo-Catholicism and was a registered Communicant at St. Stephen’s Episcopal Church in South Boston.  Scudder wrote “Socialism and Character” in 1912, centred on religious socialism and social teachings of the Christian faith, emphasizing the social teachings of Jesus in the spirit of the social gospel.  She was convinced that Christianity and Socialism went hand-in-hand.   Charles Sheldon, a Congregational Minister, committed to Christian Socialism  was another leader of the Social Gospel movement.  His theological outlook focused on the practicalities of the moral life with personal redemption from sin through Christ.  His most famous book “In His Steps” coined the phrase “What Would Jesus Do.”

Irwin St. John Tucker, an ordained Episcopal priest joined the Socialist party in 1913.  He strongly held that the Church should be involved in social issues.  “My first celebration of the Holy Communion. . .was offered in commemoration of all the great ones, Christian or unChristian, who helped mankind know the truth that make men free.”  In his list of the “great ones” were Plato, Aristotle, Socrates, Galileo,  and Euclid “a company surely seldom brought together in the sacrifice of the altar. . .”. J. Stitt Wilson, a Methodist minister and social worker in Chicago believed that  Socialism was the social order of truth.  He said that in The Sermon on the Mount he “saw a code of social duties, a revelation of the fundamental principles of Social Justice….”

George W. Woodbey, a socialist African American Baptist Minister wrote “The Bible and Socialism”  in 1904 and “The Distribution of Wealth” in 1910.  While minister at Mt. Zion Baptist Church in San Diego, he served on the Board of the Socialist Party of California.   Bouck White, aka Charles Browning White, was a socialist who drifted through the Methodist Episcopal Ministry, the Congregational Ministry and served as an Episcopal lay youth worker before starting his own church – The Church of the Social Revolution.  In 1911 he wrote “The Call of the Carpenter” portraying Jesus as a working man, agitator an social revolutionist that was dismissed from the Holy Trinity.

Harry F. Ward, a student of Rauschenbusch, was a Fabian Socialist who readily accepted the new social gospel.  A 1920 New York State Joint Legislative Committee to Investigate Seditious Activities reported that there were two dangerous centers of revolutionary Socialist teaching of a university type in Ecclesiastical institutions, one of which was the Union Theological Seminary in New York where  Ward taught Christian Ethics.  In his writings, Ward showed sympathy for socialist reformers and Bolshevism in Russia.  He also wrote “The Labor Movement” which contained addresses delivered before the Boston School of Theology where he expressed approval of the Industrial Workers of the World (IWW) which he characterized as the most ideal and practical Christian philosophy since the days of Jesus Christ.

F. D. Huntington, a Marxist, founded the American branch of the Christian Socialist Movement (CSM) to become a religious arm of the Fabian Socialist Society.  The Christian Socialist Movement emerged in the late 1880s and many prominent leaders of the early Socialist Democratic Party and its successor the Socialist Party of America were members.  The CSM was to “permeate churches, denominations and other religious institutions with the social message of Jesus to show that socialism is the necessary economic expression of Christian life, to end the class struggle. . .and to hasten the reign of justice and brotherhood on the earth.”

The Social Gospel theology was unique in that these ministers essentially rewrote the Word of God to fit their Socialist agenda.  They taught that man could attain his own salvation through social reformation to build God’s Kingdom on earth.   The acceptance of this new Socialist creed moved religion out of the church and into the political, social and economic arena.  Reform First – Religion Second.  Those in the Social Gospel Movement and the Progressive Movement worked hand-in-glove to push big government.  The Social Gospel became the primary gospel of liberal theologians we see today.

The prophets prophesy lies in my name:  I sent them not, neither have I commanded them, neither spake unto them: they prophesy unto you a false vision and divination, and a thing of naught, and the deceit of their heart.   Jeremiah 14:14

← Our Nation’s Founders on God and Government
Germanophobia →