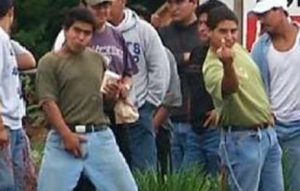 America is under no obligation to allow anyone into our country, under no obligation to compensate, in any way, the citizens of the failed governments around the world, including those in our own hemisphere. In fact, had we any obligation to the peoples of less successful countries it would be to encourage their governments to allow, even facilitate, the freedoms that have made America a beacon for their “tired and poor.”   We are a nation of laws, not of men. And our laws are, or should be, to benefit citizens of our own country, not to be customized to fit political agendas.

In 2013 Rep. Gutierrez of IL threatened that if we didn’t pass some form of amnesty, women would be raped and death would ensue. Sounds a lot like the left’s threats if we repeal ObamaCare doesn’t it?  Gutierrez wanted to hold U.S. citizens guilty for those who chose to break our laws. No one bothered to ask him about all the American citizens who have died because the government refused to enforce our immigration laws or why Obama had encouraged illegal aliens to not only sneak into America but to avail themselves of our welfare programs.  Of course the threats didn’t work.  But what the left wanted Obama granted with an executive order.

Now fearing legal challenges to Obama’s unconstitutional executive order for the Deferred Action for Childhood Arrivals (DACA) program that shielded up to 5 million illegals from deportation,  the former gang of 8 leaders, Senators Lindsey Graham, R-SC and Dick Durbin, D-IL,  introduced a new version of amnesty, the  Dream Act 2017.   Graham and Durbin hope to encourage Republican Senators to throw themselves at the feet of greed once again and open America’s doors to law breakers.

Like most left-wing programs, amnesty has nothing to do with compassion. It is a socialist/progressive idea pandering to big corporations who need low cost labor to increase their profit margin so they can line the pockets of the ruling elite. American workers be damned!

The Dream Act which has repeatedly been rejected by Congress and the American people since first introduced in 2001, would increase the pool of eligible illegal aliens by raising the age limit for unlawful entry into the U.S. to 18. The old version was 16 and required illegals to either join the military or finish two years of higher education whereas the new version allows illegals to become legal permanent residents by only maintaining employment and exempts full-time caregivers from all educational or employment requirements.

According to Rep. Lamar Smith R-TX, Graham and Durbin are perpetuating the problem they claim the new Dream Act would solve while penalizing citizens and legal immigrants and encouraging even more illegal immigration.   Once these dreamers become citizens, they can petition for their parents who live in the U.S. illegally or still reside in their native country, along with other immediate family members.  to be legalized. The parents could then petition to bring in others in an endless chain.

It is estimated that at minimum 7 million people work illegally in the U.S.  The Dream Act 2017 will only  service  to give these illegals  a legal right to compete with American citizens for scarce jobs and encourage even more illegal aliens to sneak into America hoping for yet another round of amnesty.

If the United States grants amnesty to those who were brought here illegally by their parents without first enforcing our immigration laws, and securing our southern border, we will have to deal with this problem again in the not so distant future.

“Amnesty is a big billboard, a flashing billboard, to the rest of the world that we don’t really mean our immigration law”  . Richard Lamm

← A Killing Zone for the Unborn
Illegal and Unconstitutional →