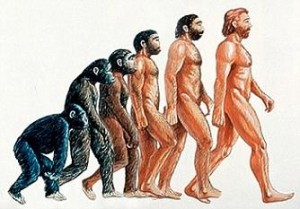 A common, but erroneous conclusion is that the basic idea of biological evolution was conceived by Charles Darwin as a secular, non-theistic solution to the problem of origins.  It is also frequently implied, by Darwinist, that the theory of biological macroevolution is a modern idea that could have developed only in our advanced scientific age. Conversely, critics often claim that the creation worldview is a product of our less informed ancestors, and that such a belief system is now a disproven religious relic.

The truth is, organic evolution is a very ancient idea first taught as early as the 7th Century B.C..

The Mayan culture, beginning about 600 B.C., developed a streamline evolutionary view that the rain-god created humans by both adding to, and in other ways modifying his previous creation. The rain-god first created rivers, than fish, next serpents, and lastly, humans.

The Hindus taught a similar idea in the Madhra Sampradaya. In their sacred text, the soul starts out its existence in a lower form of life and is “transmitted to amphibians, reptiles, mammals, semi-man and finally ended up in a superman – or nirvana state. They also taught that all animals have souls and therefore are sacred and not to be harmed. They are elated that natural science, through Darwinism, have come to believe and teach what they have always believed – that all life is a continuum.

Buddhism teaches that the universe is uncreated, without beginning or end, existing as an endless set of cycle.   There is also evidence that the Greek philosophers gleaned their evolution of life ideas from the Hindu belief in reincarnation – that souls were transformed from one animal to another until they finally reach the level of perfection they called nirvana.  Both the Greeks and Hindus likely obtained their evolution-of-life ideas from even more ancient people.

From the middle ages on, there is a record of one speculation after another on the part of various philosophically minded individuals about the origin of life by various Darwinist means.    An early Greek who postulated a theory of evolution was Lucretius (95-55 B.C.) who believed that the earth was “mortal,” existing and operating without the need for divine intervention and it was therefore necessary to explain the cause for all natural phenomena – night/day cycle, movements of Sun/Moon/Stars, and the existence of plants and animals – solely in naturalistic terms. To account for the existence of the living world, many ancient scholars, such as Lucretius, accepted the idea of spontaneous generation.

Atheism also played an important part of some early evolution worldviews. The Ionian evolution theory of origins made the formation of the world a natural event. Thanks to the Ionians this has become the universal premises of all modern science.

Certain ancient theistic religious ideas also helped pave the way for Darwinism. The Great Chain of Being doctrine taught that all life was hierarchically and immutably created by God, or evolved as a result of the natural laws that God set in motion. Deism easily lent itself to Darwinism. One of the first naturalistic evolutionary theories was proposed by Thales (640-546 B.C.) of Miletus, a city in the province of Ionia on the coast near Greece. Thales was also evidently the first person to advance the idea that life originated in water. He advocated that “the world was not made by the gods, but was the work of material forces interacting in nature.

One of Thales’ most famous students, Anaximander (611-547 B.C.) taught that life originated in the sea or in a moist environment, and once life reached land, it somehow evolved and adapted, concluding that humans evolved from fish or fish like forms which eventually turned into men, discarded their scaly skin and moved to dry land. He also taught that everything came from the “apeiron,” a Greek word meaning unlimited, infinite or indefinite past and would eventually re-evolve, returning to the apeiron, only to re-evolve in an endless recycling process reminiscent of reincarnation.

The Greek philosopher Empedocles (493-435 B.C.), often called the father of evolutionary naturalism, argued that chance alone “was responsible for the entire process” of evolution of simple matter into modern humankind, concluding that spontaneous generation only could fully explain the origin of life – the earth itself is both our creator and our god.

Aristotle (384-322 B.C.) taught that humans are life forms that happened to be the highest point of one long, continuous “ascent with modification” of life. He made a detailed study of all life known to the Greeks in his day and concluded that all life was linked by some evolutionary process.

Not only is evolutionary naturalism an old idea, but the creation-evolution conflict is ancient as well. During the eighteenth century European “Age of Reason,” an attempt at a complete separation of faith and reason, coupled with a belief in the self-sufficiency of reason to explain all causality, precipitated the warfare of science with theology.

Darwin’s work was only the “palace coup,” among the elite, the final act in a long drama to establish a lawful, evolutionary worldview among the people. Virtually every reputable British scientist rejected this evolutionary hypothesis when the book “Vestiges of the Natural History of Creation” by Robert Chambers in 1844, advanced it.

Modern Darwinist conclude that humans are merely African apes and that since evolution is our creator, evolution is our god. Nobel laureate and developer of the Salk vaccine Jonas Salk, was once asked if, when he used the world evolution, he meant God, Salk replied “if I were to define God I would say God is evolution. Evolution to me is what God is to others. It’s a force that exists, that repels us, that impels us, that causes me to do what I do. It causes you to do what you do.”

Organic evolution is the present worldview of many religions and cultures, and is not a modern, or even an exclusively scientific idea, as is often claimed in an attempt to give Darwinism credibility.

The origins of Darwinism is found in ancient religions, and in Greek and other ancient pagan philosophers. Acceptance of the modern evolutionist worldview did not occur because modern science has replaced old superstitions about biological origins. It may be more accurate to state that modern evolution philosophy has more to do with the resurrection of certain ancient religious beliefs than the results of scientific research.