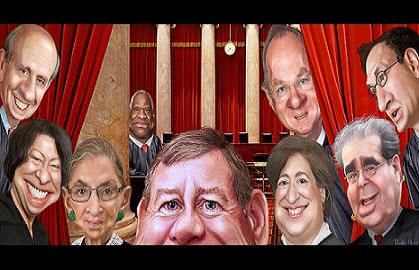 Our Founding Fathers felt strongly about limiting the power of judges because they had suffered under tyrannical and dictatorial British judges.  Reforming the judiciary, along with “no taxation without representation,”  was among the American colonists’ principal complaints about the British Empire prior to the revolution.

In June 1788, Alexander Hamilton  wrote that “Whoever attentively considers the different departments of power must perceive, that, in a government in which  they are separated from each other, the judiciary, from the nature of its functions, will always be the least dangerous to the political rights of the Constitution; because it will be least in a capacity to annoy or injure them.  The Executive not only dispenses the honors but holds the sword of the community.  The legislature not only commands the purse, but prescribes the rules by which the duties and rights of every citizen are to be regulated.  The judiciary, on the contrary, has no influence over either the sword or the purse; no direction either of the strength or of the wealth of the society; and can take no active resolution whatever.  It may truly be said to have neither FORCE nor WILL, but merely judgment; and must ultimately depend upon the aid of the executive arm even for the efficacy of its judgments.”   Federalist Paper No. 78

Judiciary encroachment began with the New Deal of the 1930’s, and has since began to act on the premise of judicial supremacy where they no longer review and apply law but actively seek to modify and create new constitutional law from the bench thereby using precedents to be binding on the other two branches.   They operate on the assumption that a Supreme Court decision on constitutional interpretation is final for all branches of government unless the Court reverses itself in the future, or a constitutional amendment is passed.  The result – the courts have become more assertive and politicized to the point of an abuse of power; an abuse allowed by the passivity of the executive and legislative branches, leaving us with a judicial branch that has run-a-amok.

Thomas Jefferson was clear about the absurdity of claims of judicial supremacy:  “. . .to consider the judges as the ultimate arbiters of all constitutional questions; is a very dangerous doctrine indeed, and one which would place us under the despotism of an oligarchy.”  He warned that “the germ of dissolution of our federal government is in the constitution of the federal judiciary, an irresponsible body. . .working like gravity by night and day, gaining a little today and a little tomorrow, and advancing its noiseless step like a thief, over the field of jurisdiction, until all shall be usurped from the States, and the government of all be consolidated into one.”

President Andrew Jackson similarly interposed the executive branch against the Supreme Court during the debate over removing the charter of the Bank of the United Sates.  To those who asserted that the Bank was constitutional because of Supreme Court precedent, Jackson retorted: “The opinion of the judges has no more authority over Congress than the opinion of Congress has over the judges, and on that point the President is independent of both.  The authority of the Supreme Court must not, therefore, be permitted to control the Congress or the Executive when acting in their legislative capacities, but to have only such influence as the force of their reasoning may deserve.”

President Abraham Lincoln saw the Supreme Court’s Dred Scott decision enforcing slavery as an assault on the freedom of all Americans.  In his inaugural address Lincoln said of the Supreme Court;   “. . . if the policy of the government upon vital questions affecting the whole people is to be irrevocably fixed by decisions of the Supreme Court, the instant they are made in ordinary litigation between parties in personal actions, the people will cease to be their own rulers, having to that extent practically resigned their government into the hands of that eminent tribunal.”    Lincoln held that Supreme Court decisions should be limited to the litigants involved in a case and otherwise ignored as a rule of general application.

Article III, section 2, clause 2 provides that “the Supreme Court shall have appellate Jurisdiction, both as to Law and Fact, with such Exceptions, and under such Regulations as the Congress shall make.”  This power, along with Congressional power to create and abolish all lower federal courts, provide for a powerful check on the judiciary.  Acting together, the legislative and executive branches can limit the jurisdiction of the federal courts through ordinary legislation to remove the power of the courts to hear certain types of cases that the executive and legislative branches believe the Court has simply gotten wrong in the past.

Sources:  The Political Foundations of Judicial Supremacy by Keith Whittington

← America Amidst the Seismic Shift
Deviant Behavior: It’s Not Natural →

1 comment for “JUDICIAL SUPREMACY: A Threat To The Constitution”