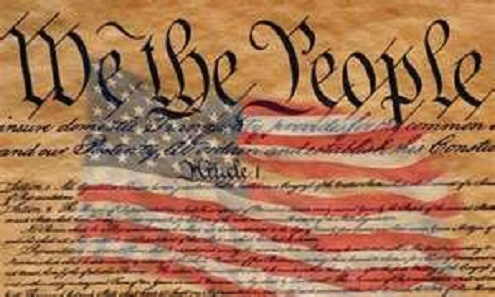 “We the people of the United States, in order to form a more perfect union, establish justice, insure domestic tranquility, provide for the common defense, promote the general welfare, and secure the blessings of liberty to ourselves and our posterity, do ordain and establish this Constitution for the United States of America.”

This is the sole purpose of the US Constitution. No constitution, no union…

“We hold these truths to be self-evident, that all men are created equal, that they are endowed by their Creator with certain unalienable Rights, that among these are Life, Liberty and the pursuit of Happiness.—That to secure these rights, Governments are instituted among Men, deriving their just powers from the consent of the governed, –That whenever any Form of Government becomes destructive of these ends, it is the Right of the People to alter or to abolish it, and to institute new Government, laying its foundation on such principles and organizing its powers in such form, as to them shall seem most likely to effect their Safety and Happiness.”

The United States of America is a union of fifty sovereign states. That union is established by, and conditioned upon, the Law of the Land, the terms and conditions of the US Constitution. Without the US Constitution, there is no union of fifty sovereign states – there can be no United States of America. The people and the states have the right and the duty to protect and preserve liberty at all cost, and to force the Federal Government if necessary, to live within Constitutional boundaries, or abolish this runaway government and start all over again.

Are corrupt DC elitists certain that they want to toy with the American people and the US Constitution, rendering the document nothing more than a relic from history and placing at risk, the union of states it establishes?

The Federal commitment to Global Governance and UN Agenda 21 taken under the Clinton Administration in September of 2000 and followed by every administration since, is a direct violation of everything the US Constitution and fifty state constitutions stand for… it cannot be allowed to continue.

The notion that the Federal Government can make up the Law of the Land at will via executive, judicial or legislative fiat, is insane on its face. The idea that the people are limited to the voting booth or a federal courtroom as their only remedy for a runaway federal government is equally insane.

If the 9th and 10th Amendments no longer stand, then the entire Constitution is null and void and the union of fifty sovereign states is also instantly voided. Before we dissolve this union and institute new government, laying its foundations upon that which will guarantee every citizen and state freedom and liberty, sovereignty and security, we must make every effort to save this union by re-establishing the balance of power at the foundation of the Constitution.

We shall not allow the US Constitution and the union it forms to perish without a fight.

Global Governance my eye! The United States of America is ONE NATION, Under God, Indivisible, with Liberty and Justice for ALL. It is so, because the Declaration of Independence, the US Constitution and the Bill of Rights say so. Destroy that at the expense of the union itself!

Who are Bill Clinton and Barack Hussein Obama to say otherwise? Temporary residents of the people’s White House come and go. Freedom and Liberty are forever, because the American people say so and the American people are the final word on the subject.

State governments can stop the next Civil War by standing up and keeping their oath to respect, protect and preserve the US Constitution and force the Federal Government to live within the confines of that compact. They can do this by simply passing the Balance of Powers Act in their state and rejecting all “unconstitutional acts” of the federal government at the state line.

Or, they can sit on their hands, remain part of the problem and wait for the next Civil War to begin.

“The Senators and Representatives before mentioned, and the members of the several state legislatures, and all executive and judicial officers, both of the United States and of the several states, shall be bound by oath or affirmation, to support this Constitution;” – Article VI

According to Article VI of the US Constitution, every elected lawmaker and law enforcement officer in this country has the power and the duty to support, protect and defend the US Constitution and the Representative Republic it forms. No excuse from federal or state lawmakers or employees is good enough. It is time for true patriots to stand and be counted.

The Constitution prohibits any form of global governance, national or international dictatorship, or socialist experiment, be it democratically elected or not. The states must act or the people will have no peaceful alternatives.

Either way, freedom and liberty will be protected and preserved. The States can do it peacefully or the people will do it by whatever means necessary. The Second Amendment exists for just such an occasion.

Over the last 237 years, more than a million brave American men and women have fought and died for the US Constitution, our Representative Republic, freedom, liberty and justice for all. They did not die in vain.

The States can reassert proper constitutional balance of powers or the people will. It’s not a threat; it’s a prediction. Americans are the most peaceful and tolerant people on earth, until push becomes shove.

The clock is ticking… The States must act swiftly and decisively. Every patriotic American citizen must act as well, calling upon their state officials to take immediate measures to stop the runway Fed before we reach the point of no return.

Use the information linked in this column to become part of the solution. JOIN the real revolution to reinstate the US Constitution as the only Law of this Land.

CONTACT ALL YOUR REPRESENTATIVES. BOMBARB THEM WITH LETTERS. LET OUR VOICE BE HEARD!

DO IT NOW or FORGET ABOUT FREEDOM. Our Country is at a crossroads……..Freedom or Socialism. I Strongly Recommend for Freedom!