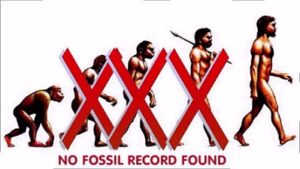 In May of 2009, paleontologist Jorn Hurum, led the team that analyzed a 47 million year old fossil, dubbed Ida, which he claimed represented “the closest thing we can get to a direct ancestor.” Also among the team was Philip Gingerich, a member of the Committee for Research and Exploration of the National Geographic Society, who claimed that Ida bridged the evolutionary split between higher primates such as monkeys, apes and humans and was “the first link to all humans.”

Ida, properly known as Darwinius masillae, had a unique anatomy. The lemur-like skeleton features primate-like characteristics, including grasping hands, opposable thumbs, clawless digits with nails, and relatively short limbs. Scientists were able to examine fossil evidence of fur and soft tissue and even picked through the remains of her last meal: fruits, seeds, and leaves. But was she a missing link?

What exactly is a missing link? Evolutionists claim it is the bridge between man and the apes, the hypothetical [mythological] ape-like ancestor of both. But in reality, no one actually knows what a missing link is because, well, it’s missing! We’ve never seen one. Which is more the shame for evolutionists who depend on innumerable missing links that supposedly lived in the unobserved past and well, just disappeared, to be replaced by evolved descendants.

When Charles Darwin popularized the theory of evolution, he didn’t actually have any evidence that it was true. For his theory to be real science, we should have discovered millions upon millions of transitional fossils that show the development of one species into another species. Instead, we have zero, zilch, nada! Even evolutionist Stephen M. Stanley of Johns Hopkins University admitted that “… the fossil record does not convincingly document a single transition from one species to another.” What scientists find is in fact a sudden explosion of fully formed complex life in the fossil record.   Go figure!

Once scientists pushed Neandertal man as the missing link ape-man but now admit that his supposedly stooped posture was due to disease. Ramapithecus once widely regarded as the ancestor of humans is now recognized as an extinct type of orangutan. Piltdown man was a 40 year hoax based on a human skull cap and an orangutan’s jaw. Nebraska man was another hoax based on a single tooth of a type of pig now only living in Paraguay. Detailed studies of Australopithecus, aka Lucy, show that she was not evolving into a human even though she may have walked more upright than most apes.

As for Ida, Richard Kay, an evolutionary anthropologists at Duke University wrote in Science magazine in 2010 that all the hype, while entertaining, was sensational, disturbing, inaccurate and misleading. There is no concrete proof that the fossil is 47 million years old or that she is an ancient ancestor of humans. In fact, Ida is not a missing anything, she is a forbearer of modern-day lemurs and lorises. Blythe Williams an evolutionary anthropologists at Duke says that Ida does not contain “Key anatomical features that would prove it to be a close relative of apes, monkeys, or humans.”

There is no solid, substantiated evidence in support of Darwin’s theory of evolution. Evolutionists themselves cannot agree on any of the alleged evidence because all of the alleged evidence is a matter of interpretation. Shouldn’t common sense tell you that when a theory proves itself time and time again to be in contradiction with real evidence, scientific response should be to scrap the theory and find a model in keeping with the evidence?

Of course for that to happen, those scientists who sold themselves to the Big Green Machine would also have to question the validity of  the United Nation’s global warming theory.  Don’t see that happening as long as their is money to pocket.

← Which “New Normal” do You Mean?
Coronavirus and Politics- a disease of the haves and the have nots →