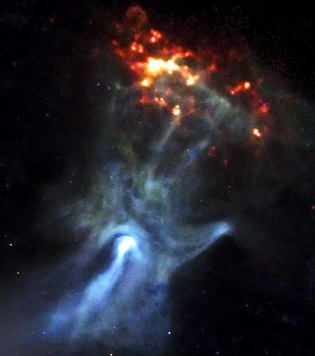 My basic argument against the Theory of Evolution is the fact that  “A Theory” is nothing short of a best guess.  It’s called a theory because noone can prove it to be a fact. For evolution to be a true science it would have to be an ongoing process.

While there is no way, short of faith, to prove God created the universe, it is a much more realistic concept than an idea of hypothetical facts dreamed up by an atheist. Personally, I have always believed that the best evidence for God’s creation is the very existence of God’s creation.

It is impossible to explain the universe without God.  Life was not created by natural phenomenon.  Matter did not create matter.

According to Dr. Michael G. Houts, Ph.D., in his essay, Evolution is Religion, Not Science,  one of the greatest deceptions perpetrated by atheists and humanists is that the theory of evolution is somehow “science,” when in reality, just like all “origin” science, evolution has nothing to do with science. It is not observable, testable, or repeatable.  In truth, advances in science and technology now confirm that physical and analytical evidence strongly favors the Christian creator.

Hundreds of billions of dollars have been spent on biotechnology however, despite this tremendous investment of money, talent and equipment, no one ever has come close to making life from non-life. Relatively simple techniques such as cloning make national headlines when achieved but to an objective observer, cloning, which essentially involves transferring existing DNA from one organism to another, does no more than show how amazing and complex life truly is.

Many evolutionists, and the textbooks they write, point to experiments such as the Miller-Urey experiment to show that what they call the “building blocks” of life could potentially form spontaneously.  However, these so-called “building blocks” are no closer to being a living organism than the atoms they comprise. Even most evolutions now agree that the atmosphere simulated by Miller could not have existed. Yet, the overwhelming desire to suppress or ignore evidence that contradicts their atheistic worldview only provides another example of how true science has become the enemy of the left.

In recent years, many evolutionists have attempted to shift the origin of life debate into areas where it is more difficult to apply operational science such as a theory that life somehow arose in the Universe and was then “transported” to earth.   The significance of discoveries in space is also more frequently overstated or distorted to mislead the reader. In a 2000 study researchers discussed organic molecules found in space calling them “primitive life forms,” “ancestral cells,” and “microbes.” But, only at the end is the reader given a clue as to what was actually found: “acetylene, a building block for benzene, and other aromatic molecules that, in turn, can form complex hydrocarbons, the chemical tuff of life.”  Because C2H2 was detected in space, we are lead to believe that scientifically, life on this earth could have come from Mars. In reality, C2H2 is not noticeably closer to being a living organism than carbon or hydrogen alone.

Evolution taught under the guise of science has become nothing more than a useful tool for the secular left to promote humanism and other forms of atheism in the public schools.  “I am convinced that the battle for humankind’s future must be waged and won in the public school classroom by teachers who correctly perceive their role as the proselytizers of a new faith: a religion of humanity that recognizes and respects the spark of what theologians call divinity in every human being. These teachers must embody the same selfless dedication as the most rabid fundamentalist preachers, for they will be ministers of another sort, utilizing a classroom instead of a pulpit to convey humanist values in whatever subject they teach, regardless of the educational level—preschool, day care, or large state university. The classroom must and will become an arena of conflict between the old and new—the rotting corpse of Christianity, together with all of its adjacent evils and misery, and the new faith of humanism.” The Humanist, (Dunphy, 1983, 43[1]:26).

“Some people, in order to discover God, read books.  But there is a great book: the very appearance of created things.  Look above you!  Look below you!  Read it!  God whom you want to discover, never wrote that book with ink.  Instead he set before your eyes the things that he had made.  Can you ask for a louder voice that that?  St. Augustine