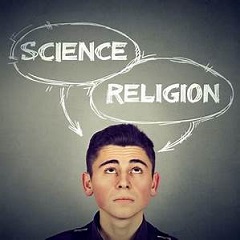 One of the greatest tragedies of our times is the impression that science and religion have to be at war.  Francis Collins

Science is a very powerful method of gaining and applying knowledge. While it has a large domain, it is not the end all and be all.  Scientists can tell us what they perceive to be truth but,  science can not determine Truth.

While science is an amazing undertaking that teaches us about life, the world, the universe,  it has never revealed why the universe came into existence nor what preceded its birth, nor has it disproved the existence of God.

Biological evolution has not brought us the slightest understanding of how the first living organisms emerged from inanimate matter on this planet and how the advanced eukaryotic cells, the highly structured building blocks of advanced life forms, ever emerged from simpler organisms. Neither does it explain one of the greatest mysteries of how consciousness arose in living things.

Where do symbolic thinking and self-awareness come from? What is it that allows humans to understand the mysteries of biology, physics, mathematics, engineering and medicine? And what enables us to create great works of art, music, architecture and literature? Science is nowhere near to explaining these deep mysteries.

But much more important is the persistent question of the fine-tuning of the parameters of the universe; why is it so precisely tailor-made for the emergence of life? This question has never been answered satisfactorily, and I believe that it will never find a scientific solution. For the deeper we delve into the mysteries of physics and cosmology, the more the universe appears to be intricate and incredibly complex. To explain the quantum-mechanical behavior of even one tiny particle requires pages and pages of extremely advanced mathematics.

It appears that there is a vast, hidden “wisdom,” or structure, or blueprint for even the most simple-looking element of nature. And the situation becomes much more daunting as we expand our view to the entire cosmos.

Why did everything we need in order to exist come into being? How was all of this possible without some latent outside power to orchestrate the precise dance of elementary particles required for the creation of all the essentials of life?

The great British mathematician Roger Penrose has calculated, based on only one of the hundreds of parameters of the physical universe, that the probability of the emergence of a life-giving cosmos was 1 divided by 10, raised to the power 10, and again raised to the power of 123. This is a number as close to zero as anyone has ever imagined.

Science and religion are two sides of the same deep human impulse to understand the world, to know our place in it, and to marvel at the wonder of life and the infinite cosmos we are surrounded by.

They may never reconcile because science is not set in stone.  It is constantly evolving as new discoveries and ideas come to light, ever progressing in its search for truth. It presents one hypothesis and then replaces it with another then another.

The Bible is not a scientific textbook.  It is the Word of God that never changes and when it speaks upon historical or scientific matters, it speaks the truth.

Source:  What If Jesus Had Never Been Born by Dr. James Kennedy and Jerry Newcombe; Why Science Does Not Disprove God by Amir D. Aczel, Time

← Our Redemption Draweth Nigh
No Genderized Talk Allowed! →