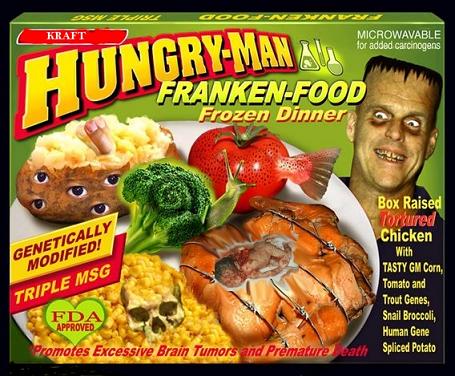 Agent Orange, produced by both Monsanto and Dow Chemicals, was used to defoliate jungles during the Vietnam War, leaving thousands of Vietnamese sick, with countless numbers of their children suffering birth defects, and a still growing group of U.S. military veterans with related diseases ranging from cancer to Parkinson’s disease.

So Why Should You Care?   Dow AgroScience, a subsidiary of Dow Chemicals has developed a new generation of genetically modified soybeans, corn and cotton seeds designed to resist a major ingredient in Agent Orange – 2,4-dichlorophenoxyacetic acid (2,4-D) and, the only  purpose to modify crops to be resistant to 2,4-D is so that you can “carpet bomb” an entire field, much like they did to the jungles  in Vietnam.

While Dow is waiting for approval for the use of 2,4-D, Monsanto is facing a class action lawsuit for the other Agent Orange ingredient, 2,4,5-T.  The suit alleges that homes and schools near one of its 2,4,5-T chemical plants are now contaminated with cancer causing dioxin, a byproduct of the manufacturing process.

What is known about 2,4-D is not reassuring.  According to the EPA:

When adult female experimental animals were exposed to 2,4-D during their pregnancy and lactation, their exposed offspring exhibited neurological effects, including delayed neurobehavioral development and changes in several neurotansmitter levels or binding activities and ganglioside levels in the brain.  Delayed neurobehavioral development was manifested as delays in acquisition of certain motor skills such as the righting reflex.”

Of course the EPA decided there was no “known reason” for not allowing its use around our homes.

The Cornucopia Institute is concerned that if this new resistant seed is allowed to be planted, the use of 2,4-D could skyrocket out of control, much like the use of RoundUp.  “2,4-D is a chlorophenoxy herbicide, and scientists around the world have reported increased cancer risks in association with its use, especially for soft tissue sarcoma and malignant lymphoma.  Four separate studies in the U.S. reported an association with non-Hodgkin lymphoma.  Research by the EPA found that babies in counties with high rates of 2,4-D application to farm fields were significantly more likely to be born with birth defects of the respiratory and circulatory systems, as well as defects to the musculoskeletal system like clubfoot, fused digits and extra digits.  These birth defects were 60% to 90% more likely in counties with higher 2,4-D application rates. . .”

William Johnson, a weed scientists (yeah, there are such people) at Purdue University said that Dicamba and 2,4-D both tend to volatilize, turning the chemical into vapor that can drift onto neighboring land, accidentally kill nearby crops and exposing greater expanses to its toxic effects.

So Why Would Anyone Even Consider Approving This Product?  Money!   Dow, pushing the use of  2,4-D resistant seeds to combat the problem of weed

resistance caused by the use of  GM Roundup resistant seeds,  hopes to make at least $1.5 billion in additional revenue.   Just as heavy use of antibiotics has led to drug resistant super germs – the use of Roundup has led to the rapid growth of superweeds.  Farmers are now being forced to spray fields with even more toxic herbicides leading to rising food costs and pollution of land and water.   Adding  additional pollution to our land and water with the use the 2,4-D hardly seems the way to go. It is like pouring gasoline on a fire.

In the same genre as the Monsanto propaganda concerning  its GM seeds and Roundup, Dow is promising its new GM seeds  and the toxic 2,4-D will not spur the creation of more resistant super weeds.  Right, that is exactly what Monsanto promised and in the U.S. we already have 13 known resistant weed species covering more than 11 million acres.  Around the world 21 weed species have been found resistant.

Finally, a governing body is stepping up to protect its citizens.  Last November, Boulder County, Colorado said no to GM seeds on county owned land.  They currently have around 16,000 acres planted with genetically engineered corn which will be transitioned out in favor of traditional GMO free farming practices.  Lets hope its not to late to contain the contamination.

Almost 65% of U.S. corn is GM and studies are now showing that the bacillus thuringiensis bacteria inserted into the corn is beginning to show up in the human bloodstream.   According to the Institute for Responsible Technology “the bt-toxin produced in the GM plants is probably more dangerous than in its natural spray form.  In the plants, the toxin is about 3,000-5,000 times more concentrated, it doesn’t wash off plants, and it is designed to be more toxic than the natural version.  In fact, the GM toxin has properties of known allergens and fails all three GM allergy tests recommended by the World Health Organization and others.”

The reason why they are succeeding!   The FDA, the USDA and the US Trade Representative  have a special set of revolving doors leading straight to Monsanto and Dow Chemical.  In 2011 alone, Monsanto spent $1.4 million on lobbying.  In 2010 they spent $2.5 million.