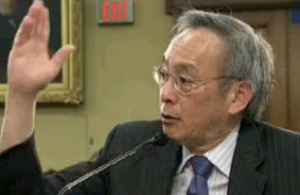 Feb 28 – Obama’s Energy Secretary, Steven Chu, testified that the administration is not interested in reducing the cost of gasoline, they want  gasoline prices to continue rising. They’re goal is to get us to use less gasoline,  and when prices soar people will use less of it.

When people have less money to spend, businesses hurt. When businesses hurt, people lose their jobs and some businesses will be forced to close. When that happens, more people have to depend on food stamps. The more food stamps issued, taxes are raised on those fortunate enough to still be employeed to ofset the cost of food stamps. How the h*ll does this strengthen or build the economy?

It’s a vicious plan which will eventually collapse our economy and our nation. This is the true goal of the Obama administration.

Chu also stated that the administration knows there is great suffering and hardship on families when gasoline cost increase. However, they don’t care. It is their goal to force you into purchase an electric vehicle that no one wants or can afford. And who could afford the extra electricity to power an electric car?

THEY DON’T CARE. IT’S ABOUT POWER, CONTROL AND MONEY. They’re in a position to control you and that’s what they are doing.

The only way to stop Obama and his abuse of power is serve him an eviction notice in November!

← Breitbart’s Tapes on Obama to be Released
Chrislam In America? →