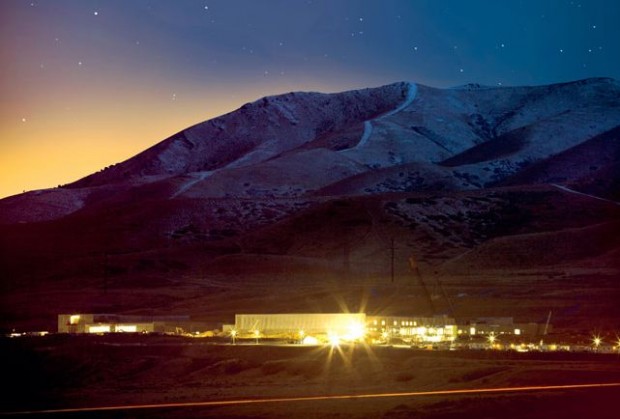 BE CAREFUL WHAT YOU SAY

In the heart of Mormon country, Bluffdale sits in a bowl-shaped valley in the shadow of Utah’s Wasatch Range to the east and the Oquirrh Mountains to the west. This is home to the National Security Agency’s   largest spy center. However, officials in Bluffdale where it is being built and the nearby Salt Lake City are kept in the dark.

Thousands of hard-hatted construction workers are laying the groundwork, a massive complex so large that it necessitated expanding the town’s boundaries. Once built, it will be more than five times the size of the US Capitol.

The building is ironically and “blandly” named the Utah Data Center. When completed in Sept. 2013 it will house four 25,000 square foot halls of servers, among other things. The cost for the project is estimated at $2 billion.

Here‘s some of the data center’s purpose:

Flowing through its servers and routers and stored in near-bottomless databases will be all forms of communication, including the complete contents of private emails, cell phone calls, and Google searches, as well as all sorts of personal data trails—parking receipts, travel itineraries, bookstore purchases, and other digital “pocket litter.”

Wired reports that the data center will store trillions of “words and thoughts and whispers” swirling on the Web. It states that “[to] those on the inside, the old adage that NSA stands for Never Say Anything applies more than ever.” In addition to public website data storage, Wired reports that it will seek out and house information on the “deep web:”

An official involved with the program has said “this is more than just a data center.” It hopes to be the ultimate code-cracking facility:

The NSA made an enormous breakthrough several years ago in its ability to cryptanalyze, or break, unfathomably complex encryption systems employed by not only governments around the world but also many average computer users in the US. The upshot, according to this official: “Everybody’s a target; everybody with communication is a target.”

The facility’s security system — an antiterrorism protection program — alone costs $10 million. The fence surrounding the building will be able to stop a 15,000 pound vehicle driving at 50 miles per hour. What’s inside that requires protections such as this? Wired has some of the specifications:

Inside, the facility will consist of four 25,000-square-foot halls filled with servers, complete with raised floor space for cables and storage. In addition, there will be more than 900,000 square feet for technical support and administration. The entire site will be self-sustaining, with fuel tanks large enough to power the backup generators for three days in an emergency, water storage with the capability of pumping 1.7 million gallons of liquid per day, as well as a sewage system and massive air-conditioning system to keep all those servers cool. Electricity will come from the center’s own substation built by Rocky Mountain Power to satisfy the 65-megawatt power demand. Such a mammoth amount of energy comes with a mammoth price tag—about $40 million a year, according to one estimate.

Former senior NSA “crypto-matematician” William Binney, who helped develop NSA’s spying capabilities before leaving in 2001, explains how the NSA deliberately violated the Constitution, which was the reason why he left, in setting up warrentless wiretapping to the extent that they did. Wired reports that much of NSA’s wiretapping practices now were made legal under the FISA Amendments Act of 2008:

Binney says Stellar Wind was far larger than has been publicly disclosed and included not just eavesdropping on domestic phone calls but the inspection of domestic email. At the outset the program recorded 320 million calls a day, he says, which represented about 73 to 80 percent of the total volume of the agency’s worldwide intercepts. The haul only grew from there. According to Binney—who has maintained close contact with agency employees until a few years ago—the taps in the secret rooms dotting the country are actually powered by highly sophisticated software programs that conduct “deep packet inspection,” examining Internet traffic as it passes through the 10-gigabit-per-second cables at the speed of light.

According to Binney, one of the deepest secrets of the Stellar Wind program—again, never confirmed until now—was that the NSA gained warrantless access to AT&T’s vast trove of domestic and international billing records, detailed information about who called whom in the US and around the world. As of 2007, AT&T had more than 2.8 trillion records housed in a database at its Florham Park, New Jersey, complex.

Verizon was also part of the program, Binney says, and that greatly expanded the volume of calls subject to the agency’s domestic eavesdropping. “That multiplies the call rate by at least a factor of five,” he says. “So you’re over a billion and a half calls a day.” (Spokespeople for Verizon and AT&T said their companies would not comment on matters of national security.)

Wired reports that in order to return to a Constitutional system, Binney suggested an idea for an automated warrant system, instead of “[subverting] the whole process.” When this didn’t happen, Binney told Wired he had hoped reform could be made under the Obama Administration. His idea didn’t take hold again. Where are we at in this country in terms of surveillance and following Constitutional privacy protections? Wired reports Binney saying  “We are, like, that far from a turnkey totalitarian state” as he held up his thumb and forefinger close together.