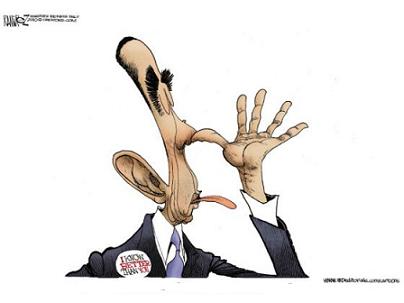 In yet another “up yours” to the brave men and women who put their lives on the line to protect this country,    Obama proposed plans to cut health care benefits for active and retired military while not adjusting benefits for civil employees who just happen to be unionized.

Obama’s budget plan was to cut nearly $2 billion in expenses from TriCare through increased fees to military personnel and their families.   TriCare premiums would increase anywhere from 30% to 78% in the first year followed by sharply increased premiums ranging from 94% to 345% in the following 5 years.   In addition to premium increases, veterans will be hit with a new annual fee for a program called TriCare for Life and some benefits will become “means tested” making them more of a welfare type program.   All these changes to TriCare would not take affect until 2013 – after the election making it easier for Obama to lie during his campaign.

The House Defense Appropriations Bill gave Obama slightly more than he had asked for, but instead of forcing  underpaid military personnel to bear the brunt of Obama’s plan,  cuts were made in the non-defense discretionary budget to lessen the impact.

Obama has a long list of objections to HR 5856 including the fact that the House refused his request for a pay raise for the civilian workforce and cut biofuels development by $70 million.

Commander David K. Rehbein of the American Legion says that Obama also has plans to force private insurance companies to pay for treatment of military veterans who have suffered service-connected disabilities and injuries.  “He says he is looking to generate $540 million by this method but refused to hear arguments about the moral and government-avowed obligations that would be compromised by it.”  After all, it was the government that sent our brave men and women into harm’s way  —  not private insurance companies.

Is this an attempt to force military veterans into state-run insurance exchanges under ObamaCare where they will fall under the control of the “Death Panel?”

Obama is threatening to veto the bipartisan Defense Appropriations Bill.   He has wasted billions on failed renewable energy project schemes and on rebuilding mosques in the Middle East since he took office  —  money that taxpayers will never recover.  He has worked hard to remove any mention of God in the military while celebrating homosexuals and pagan religions.   And, in their usual Friday night dump, the White House released its annual report on staff salaries which showed that their payroll grew from $37.1 million in 2011 to $37.8 million in 2012.    You can see the report here.     Obama has 22 assistants, 68 special assistants and 24 deputy assistants among the 468 employees at the White House.   I guess that “shared sacrifice” only applies to the peasants!

Once again we see that all that “love and affection” that Barack and Michelle extend to our military and their families is nothing more than a photo-op for his political ambitions.   Any veteran that would support this man’s re-election should be tarred and feathered.