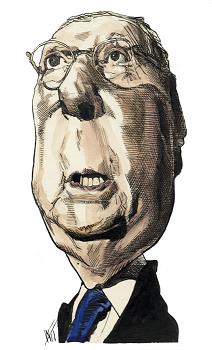 RINOs are starting to show their true color in the ObamaCare repeal debate.   While Mitt Romney is siding with the Obama Administration, steadfastly arguing against the Supreme Court decision that the individual mandate amounts to new taxes (because of RomneyCare),  good old Mitch McConnell is telling us that the odds against those who want  ObamaCare repealed.

In February McConnell had the option of bringing Jim DeMint’s amendment to the floor of the Senate to force another vote on repeal but he refused because he didn’t want to make Harry Reid mad.   How about the voters Mitch?   When it hit the fan and McConnell was told to get in line or get out of the way, he folded like a cheap suit.

Now McConnell claims he will force the issue before the election and then make repeal a priority if the GOP takes back the Senate, but the odds are against full repeal.  Hogwash!  The truth is many RINOs in power like parts of ObamaCare and they are working hard to find ways to not repeal the entire bill, just as they  found ways to weasel out of paying down the debt, and are actively looking for  way to to bring back PORK.

We are being played by a group of RINOs in Congress who have consistently shown in the past few years the lack of testicular fortitude to do what’s right when it counts.  The debt ceiling —  CAVE.  The Continuing resolution  —  CAVE.  Repealing ObamaCare  —  Ready to CAVE.

Let’s be very clear here — voting to repeal ObamaCare is not enough  —  REPEALING IT IS!

So far the good ole boy RINOs have excelled at theater and not much else.  We need more Jim DeMint’s in office and less weaselly RINOs!

← Isn’t It Racist To Judge A Person By The Color of His Skin?
Obama’s 21st Century Regulatory System →