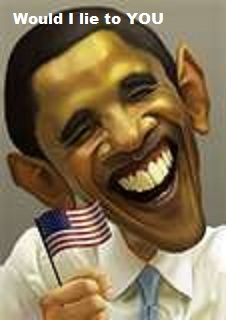 I can no longer refer to Obama as a sneaky, disgraceful, shameful, appalling, backdoor bribing, lying dirty underhanded, slithering, discreditable double dealing president because, it could be misconstrued as hate speech: which it isn’t. It’s just his character. So, I’ll just refer to him as a misinformed, misguided, erroneous, imprudent, brainwashed, double-talking politician who happens to occupy the White House. (Except the white house is beginning to look redder every day.)

According to an op-ed in article in the Wall Street Journal, Obama has promised “to sign an executive order to root out ‘dumb’ & ‘outdated’ regulations that stifle job creation and makes our economy less competitive.”

The article (supposedly) written by (he whom deems himself so great) Obama, also states: “Where necessary, we won’t shy away from addressing obvious gaps: new safety rules for infant formula; (women had better breast feed) procedures to stop preventable infections in hospitals; efforts to target chronic violators of workplace safety laws. But we are also making it our mission to root out regulations that conflict, that are not worth the cost, (that covers all of Obama’s regulations) or that are just plain dumb.” (It could just be me, but everything Obama has done can be classified as ‘just plain dumb’.)

“But creating a ‘21st-century regulatory system’, (new world government) is about more than which rules to add and which rules to subtract. As the executive order I am signing makes clear, we are seeking more affordable, less intrusive means to achieve the same ends—giving careful consideration to benefits and costs.” (Here’s a hint. How about undoing every regulation you have shoved down the throats of the American citizens.) “This means writing rules with more input from experts, businesses and ordinary citizens.” (If they’re Obama’s experts, we’re screwed!) “It means using disclosure (like the health care bill) as a tool to inform consumers of their choices, rather than restricting those choices.(What a laugh! Your administration doesn’t inform, it forces!) And it means making sure the government does more of its work online, just like companies are doing.”

“Despite a lot of heated rhetoric, our efforts over the past two years to modernize our regulations have led to smarter (that’s Obama’s opinion) —and in some cases tougher—rules to protect our health, (BS) safety (double BS) and environment (triple BS).  Yet according to current estimates of their economic impact, the benefits of these regulations exceed their costs by billions of dollars.” (There’s not enough BS to cover this statement.)

“This is the lesson of our history: Our economy is not a zero-sum game. Regulations do have costs; often, as a country, we have to make tough decisions about whether those costs are necessary. But what is clear is that we can strike the right balance. We can make our economy stronger and more competitive, while meeting our fundamental responsibilities to one another.” (more redistribution of wealth for Obama’s misguided collective salvation )

The complete article can be read here. Regulation rules are Fashion in Washington. The Blaze.

In 2010 under the Obama Administration, the federal government issued 43 major new regulations, inflicting $26.5 billion in new regulatory cost on top of the existing $1.75 trillion. This is twice the amount of all individual income taxes collected last year.

The only possible way to make our country and economy stronger is  for Obama to step down (or be impeached) and take all the Socialist Czars with him. Confiscate all of Obama’s belongings and assets (including all the Senators and Congressmen assets & belongings who voted with him), hand Obama over to the Chinese to hold for collateral on our ‘good faith’ debt, charge the chinese one heck of an import tax, continue coal mining, charge the same price for grain that we are charged for oil, begin drilling so we can be fuel independent, dismantel all the useless organizations like the BATF and EPA, replace the IRS with Fair Tax, stop sending our money to foreign countries, and remove the responsibility of the taxpayers having to pay for all government workers retirement & health insurance. There’s more that can and should be done, but this would be a start in the right direction.

← With These RINOs In Charge, Who Needs Democrats?
75% of ObamaCare Taxes Will Be Paid By The Middleclass →