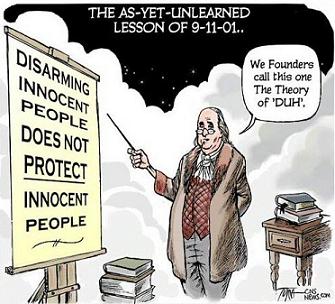 U.S.  District Judge Marcia Cooke has blocked Florida from enforcing  the “Firearm Owners Privacy Act“, because it  prevents doctors from asking patients about guns.  Cook wrote that “What is curious about this law, and what makes it different from so many other laws involving practitioners’ speech, is that it aims to restrict a practitioner’s ability to provide truthful, non-misleading information to a patient, whether relevant or not at the time of the consult. . .” citing the benefit of “preventive medicine.”

The law was adopted in 2011 after an Ocala couple complained that a doctor asked them about guns.  When they refused to answer, the doctor refused to see them anymore.

The anti-gunners were out in full force.  A spokesman for the Dade County Medical Association said that the law was” ideologically driven, politically motivated vendetta by the NRA that has to stop.”   Doctors questioning patients about their Constitutional right to bear arms isn’t politically motivated?

The law only said that doctors and other healthcare practitioners “shall respect a patient’s right to privay and should refrain” about asking about gun ownership or whether people have guns in their homes.  It  allowed doctors to ask about guns if they believed in “good faith” that the information was “relevant” to a patient’s medicare care or safety.

Now, thanks to District Judge Cooke,  guns are now a legitimate medical question as “preventive medicine.”    This will add fuel to the fire of anti-gun groups such as the Brady Bunch.

But two can play at this game.  Adults can use their free speech to tell any doctor that asks  –  it is none of your business!   Or even better – if a doctor asks you about guns in your home, ask them something personal like –  do you  run around on your spouse?  or  do you  cheat on your  federal taxes?  or do you have ever have sexual fantasies about animals?

Children are a different story.   Parents should make certain that they are in the room with a doctor and their child at all times.  Even better, explain to your children that anytime doctors ask a question about your home life, or guns in your home, the child should tell  the doctor that he will have to ask his/her parents.

And, for one minute, do not think that anything you tell your doctor is privileged information.  It goes on their database which is used by insurance companies, the federal government and in this day and time, even law enforcement.