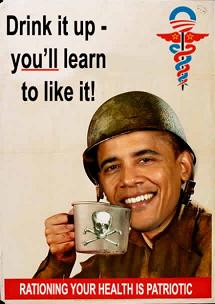 I am sure you are asking yourself, why should I care what happened in Romania – it doesn’t effect me and it’ll never happen in America.     I would remind you that those who refuse to acknowledge the lessons of the past are doomed to repeat the mistakes.

Ronald Reagan once said that “Freedom is never more than one generation away from extinction.  We didn’t pass it to our children in the bloodstream.  It must be fought for, protected, and handed on for them to do the same, or one day we will spend our sunset years telling our children and our children’s children what it was once like in the United States where men were free.”

As part of Communist Romania, Pacepa managed a large intelligence organization that, among other tasks, was charged with keeping alive a nationalized health care system which in the end bankrupted the country.  The system, very similar to ObamaCare was a bureaucratic nightmare and still is. A European Union report on post-Communist Romania’s “Health Care System in Transition” stated that the system “devastated the country”.  Romania had the highest  infant mortality rate in Europe and a death rate 70% higher than the EU average.

Health care is vital to everyone but where Marxists have seized the political reins, they consolidate their rule by nationalizing health care.

In 1948, after Romania’s Marxists leaders took control, they proudly proclaimed that they were getting rid of the “old capitalist” health care system that cared only for the rich and replacing it with a “socialized system” that would provide health care to every Romanian.  No one knew what a “socialist system” looked like, but its populist appeal made it sound good!

A few years after Romania was “blessed” with a bureaucratic managed  nationalized health care system the country’s hospitals became so badly degraded that there were frequent cases where two people had to be in the same bed.  Sauve gui peut became the catchword of the privileged Marxist nomenklatura, which took its own health care out of the hands of the hospitals destined to serve “the idiots,” as Romania’s president Nicolae Ceausescu called his people.  The Communist Party seized the Helias, a hospital built by a Western foundation, and ordained that it exclusively serve the needs of the party.  The Securitate, Romania’s version of the KGB, took over a private hospital and transformed it into a medical center exclusively destined to serve its personnel.  So did the Ministry of Defense.  In the 1970s,  Pacepa built a hospital for his foreign intelligence service, the DIE.  The hospital had no name and was hidden away in the Baneasa Forest near Bucharest, to be protected from the eyes of the “idiots.”

People in the U.S. are not used to having to pay bribes to get things done but in  Communist Romania, baksheesh was the only way to get an appointment with a reliable doctor or a clean bed in a hospital.  In 2008 the Lancet reported that in Russia each doctor and nurse still had “his or her little tax,” and that “they all prefer cash in envelopes, of course.”  Nurses took 50 rubles to empty a bedpan and 200 rubles to give an enema.  Operations started at 300 rubles, but “the sky’s the limit.”

In the U.S., baksheesh might not start out as such blatant bribes, but bribery is sure to soon become the rule in one way or another.  In France the government bureaucracy recently introduced one franchise on every medical consultation, described as a “contribution au remboursement de la dette sociale” (contribution to the repayment of the social debt).  That was followed by 18 franchise on “costly” medical procedures.  Now the French patient are learning that if they discreetly slip an envelope with cash into the pocket of the doctor’s white lab coat hanging in his office, they will get more “attention.”  A little extra attention may be vital in such a government run health care system, where doctors are obliged by law to see sixty to seventy patients a day.

One of the greatest myths about Marxism is the supposed virtue of equality for all.  If only everybody could have the same of everything, the world would be an earthly paradise.  All Marxists believe that only the state can create that paradise.  That Utopian ideal has now captured people’s imagination in the U.S.   Pacepa spent many years in the inner sanctum of a Marxist government that was preaching this Utopian ideal of equality, and he soon learned that it was nothing but science fiction  –  “Lies.  Dust in people’s eyes.”

Romanians paid with their lives to free themselves from  Marxist control and there is no better way to visualize the eventual disaster that a nationalized health care system can generate than to watch “The Death of Mr. Lazarescu,” a movie inspired by a true story of Constantin Nica, a retired Romanian engineer who had the misfortune of growing old in a country that still maintained a nightmarish government health care bureaucracy twenty years after its last Communist dictator was gunned down by his own people.

The movie follows the fictional Mr. Lazarescu as a Romanian government ambulance shuttles him from one government owned hospital to the next.  At the first 3 hospitals, although the doctors determine that he does need surgery, the government bureaucracy refuses to take him in because he is too old and does not have enough money to give baksheesh  to the hospital personnel.  A the fourth hospital, he dies after a delayed and botched surgery.  The real Mr. Nica was in fact dumped by an ambulance onto a park bench and left there to die.   The real enemy was not Mr. Lazarescu’s (Nica’s) illness, but the uncaring and authoritarian attitude so deeply ingrained in bureaucratic practices.

In the U.S., the doctor is king which is crucial for saving lives.  If a doctor thinks something is wrong with his patient, he can start all kinds of diagnostic tests, get the results and start treatment immediately.  In Great Britain, a patient has to wait some 18 weeks for an MRI. (Professor Patrick Pullicino reports that socialized medicine in Britain is now being used to end the lives of thousands of elderly hospital patients.)

In the U.S., a person can be scheduled for surgery the next day, but in Canada one has to wait months for surgery.  In the U.S. a doctor’s ability to act quickly, without having to wait for bureaucratic approval, can make the difference between life and death.  During the last century, the U.S. free market medical care system was rewarded with 72 Nobel prizes.  The Soviet Union, which invented nationalized health care, won zero.

The total U.S. gross domestic product is $14.1 trillion and America’s health care  system represents one-sixth of the economy or $2.35 trillion.   A trillion dollar bills laid end to end would make a chain 96,906,565.66 miles long – extending almost 4 million miles beyond the sun.  This is an unimaginable immense amount of American tax money and Americans should, at the very least, have been given a say about how it was to be spent.

You can read  Pacepa’s entire article at the link provided above.

No one knows better than Obama that ObamaCare sends doctors and nurses on a voyage into an uncharted health care world in which they are now just along for the ride with their patients.  Obama said that if you liked your doctor you could keep them.  Really?  Will your doctor be able to afford to keep you as a patient?  Or will your doctor even want to keep you, rather than quit medicine?

Rationalizing payment claims through the new maze of the private and public bureaucracies is not what the average person thinks of health care.  To any normal person, health care means that when you get sick, doctors and nurses who attend to you will push all else aside to give you medical care.   That will no longer be the case.  ObamaCare will permanently damage that most crucial of all relationships – between  you and your doctor.

As for hospitals, well, they are facing  the loss of at least $155 billion in compensation cuts.  One CEO who runs a chain of hospitals explained to WSJ how they would deal with the loss of compensation.  “We will make it up in volume.”   Volume?   Patients are now officially  “volume”.