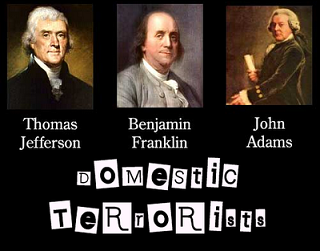 The Department of Homeland Security has just published another report on terrorism authored by Gary LaFree, Professor of Criminology at the University of Maryland and Binca Bersani, Professor of Sociology at the University of Massachusetts-Boston.  The report “Hot Spots of Terrorism” issued by the National Consortium for the Study of Terrorism and Response To Terrorism (START) will supposedly be used to aid intelligence and law enforcement in identifying potential terrorists threats and assist policy makers in developing  preventive efforts.

The report targets – what else – “any” American that is suspicious of centralized federal authority, who is reverent of individual liberty and wants to protect personal freedoms guaranteed by the Constitution.   Right Wing Extremists also includes any group that believes yjsy our way of life or personal freedoms is under attack, lost or threatened.

Then there are those terrorists who are anti-abortion, anti-Catholic, anti-nuclear, anti-Castro, etc.  To be fair, the report did make minor  mention of the Extreme Left Wing identified as those  who want to use violence rather than political process to bring about change.  The fact that they made little mention of Muslim terrorists should not come as a surprise.

Who could forget the 2009 DHS “Right-Wing Extremists: Current Economic and Political Climate Fueling Resurgence of Radicalization and Recruitment” that classified terrorists as any one or group or movement whose adherents are primarily hate oriented, mainly anti-government who reject federal authority in favor of state or local authority such as those that are pro-life or  anti amnesty, etc.  And again, DHS managed to not mention Muslim terrorists.

Two weeks later DHS released a 2nd report “Domestic Extremism Lexicon”  labeling extremists as anyone who was overly concerned about the economy, loss of jobs or foreclosure or even worse, was antagonist toward the Obama Administration, critical of free trade, anti-abortion, anti same-sex marriage, who believe in the “end time”; those who stockpile food; oppose immigration, the New World Order, the U.N. and global government; fear Communist regimes; oppose the loss of U.S. manufacturing jobs overseas; oppose the loss of U.S. prestige or who use the Internet or alternative Media to express any of these ideas.

Also in 2009 the Missouri Fusion Center issued a report “The Modern Militia Movement” to law enforcement around the country as official DHS documentation.  This little piece of fluff  warned law enforcement to keep their eyes and ears on anyone who voted for Ron Paul, the Constitutional Party and Libertarian Party presidential candidates; those that opposed the creation of a North American Union with Mexico and Canada; returning veterans, etc.

It was in 2010 that DHS organized the “Countering Violent Extremism Working Group” which was supposed to be an advisory council to create a plan to reach out to local law enforcement and community activists but is little more than an attempt to convince Americans they need to spy on their families, friends and neighbors.  This little advisory group consisted of public officials, law enforcement and Mohamed Magid, president of Islamic Society of North America (Muslim Brotherhood affiliated group), an un-indicted co-conspirator in the Holy Land Foundation case; and Richard Cohen, president of the Southern Poverty Law Center, a far-left hate group in its own right.   The Southern Poverty Law Center runs the training center for law enforcement.

So what can we conclude about domestic terrorism from DHS?   99.9% of all  white Americans are terrorists. The remaining 0.1% either work for DHS, Obama, or are sanctioned far left activists.  Don’t believe me?  Take a look at a promotional video DHS released, “See Something, Say Something” which portrays white middle class Americans as the most likely terrorists.    We learn that anyone who opposes surveillance, uses a video camera, talks to a police officer, wears hoodies, drives a van, writes on a piece of paper or uses a cell phone recording app  is a possible terrorists, as long as they are white.

If you do not work for DHS or Obama, happen to be white, love our country, and believe in the Constitution, the next time you go outside, do as I do – look up, smile and wave at the drone circling above your head!