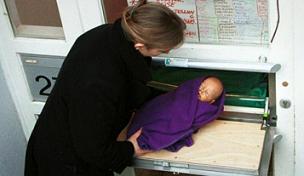 Numerous European countries have baby hatches or boxes that allow mothers to safely and anonymously abandon unwanted newborns.  Advocates say the boxes prevent infanticide, abortion and abandonment.  But the U.N. Committee on the Rights of the Child (UNCRC) is pushing to have these boxes eliminated claiming that the boxes violates children’s right to identify their parents and maintain personal relations with them.

In spite of the fact that these boxes have saved the lives of at least 400 newborns across Europe, Maria Herczog, a sociologist and member of the UNCRC says that  Baby boxes do not operate in the best interest of the child or the mother.  They encourage women to give birth in unsafe and life-threatening conditions” and send the wrong message: “Just leave your baby, these boxes seems to say.  I don’t think any community could send this message to any vulnerable person.”  The right message the UNCRC and population control freaks prefer is the Planned Parenthood clinics that beckon – come in, kill your baby.

The UNCRC  would prefer that these European countries provide better resources to women before a pregnancy crisis occurs such as family planning (UN code for abortion) easily accessible contraception and social assistance, all of which should obviate the need for mothers to resort to such a drastic solution as abandonment.

Let me get this straight – these idiots would find it preferable for mothers to murder their unborn child so they won’t grow up knowing they were abandoned!  Personally, I would rather grow up knowing my mother loved me enough to give me life even though she was unable to keep me.   Unfortunately,  the UNCRC prefers dead babies over abandoned live babies.

Kanepaja-Vanaga, a social worker,  researched baby boxes in Latvia in 2006 where 9 abandoned babies were found dead that year.  Since the country opened its first baby box in 2009, the number has been  reduced to four.   Another 17 babies were saved from the boxes, out of which 12 were adopted and the others are all in the process of finding a new home.  “One can take back a baby from a baby box, but it could not be done if he or she would be left in the woods, or in a trash bin or stairwell.”

In the Czech Republic there are currently 50 baby boxes scattered across the country, recovering 75 babies since 2005.  In 2011 the UNCRC issued a report alleging the country’s violated  the Convention on the Rights of the Child treaty which the Czech Republic had signed.   The UNCRC told them to end the program as soon as possible and focus on eliminating the causes that lead to child abandonment.

I am thrilled that the UNCRC is so concerned about the rights of abandoned babies but I can’t help but wonder: what  happened to the right of an unborn child not to be murdered?

← Will Boehner Sell Us Out Again?
Rep. Gosar: Fighting For Constitution A Losing Battle →