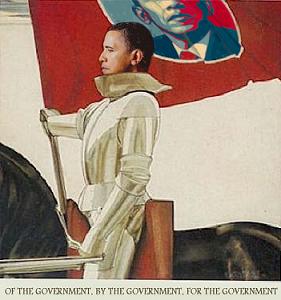 On Friday the 13th, Obama graced the Star City with his presence just to let us know that the “stakes are even bigger now than they were in 2008 because what’s at stake is not just two people or two political parties.  What’s at stake is a decision between two fundamentally different views about where we take our country right now.”

He’s right – it isn’t about political parties, its about political agendas.   I am not so sure there are two fundamentally different views about anything.  There are those liberal Rinos who believe in Socialism just as there are Liberal Democrats who can’t wait to take control.  Part of the reason the country is in the shape it is in is because of these Socialist beliefs  from members of both parties that government should be the power that controls the people and not the other way around.

What is at stake is a decision between Socialism and Capitalism.   Capitalism built this country.  Socialism is a con game  that allows the “elite” to curry favor of the “useful idiots.”

We do not exist to  serve the government.  Our Constitution makes it very plain that government exists as a creation of the people –  to serve the people who created it.

Obama said that “the 2% who benefited most from the tax breaks” also benefited “from increased profits and productivity.” And, since we are trying to bring down our deficit and our debt we shouldn’t waste a trillion on those 2 percenters or else government could be forced to cut back on services to veterans or raise interest rates on student loans.

When did it become obscene to make a profit from investment of your own money?  If it were not for those 2 percenters willing to invest their money there would be way for you to make money, as  very few good paying jobs would exist.   It is true that those with the most money can hire the best tax professionals and lawyers to help them through the legal loophole maze that is known as the tax code.  I don’t blame them, no one wants to give away their hard earn money to a bunch of money grubbing politicians who will waste it.   And,  it was those same politicians who created all those legal loopholes to reduce taxes because most of them are in the top 2% of this nation.  Do you really think they are going to pay additional taxes?

Obama hasn’t tried to bring down our deficits or our national debt and doesn’t plan to in the future.  All one has to do is check out his proposed 2013 budget proposal.  Those students he is so worried about will have to pay, beginning in June 2013, a whopping 6.8% for federally backed loans.

The worst pandering came in the section where Obama  said that for those that are successful, somebody along the way gave them some help – “somebody helped to create this unbelievable American system that we have that allowed you to thrive.  If you’ve got a business, you didn’t build that – somebody else made that happen.”

What a idiotic thing to say.  How condescending!  This country was built on the backs of generations of legal immigrants  through their hard work and willingness to sacrifice for the possibility of wealth and security for their families and future generations.  That was and still is the American Dream.  America has always held forth opportunity for anyone willing to work for it.  And, those that achieved that Dream built this country, not with the help of government but through their own self determination.   Big government is and always has been a deterrent to success.

Remember, the  government can not spend money without taking it from someone else and the money they take can not be spent in the private sector to benefit society as a whole.