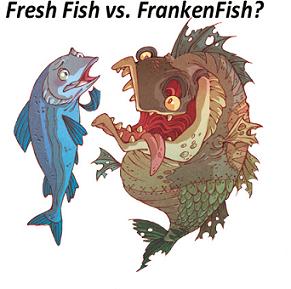 The mass cultivation of genetically modified soybeans has been a detriment to the environment and had a health impact worldwide.   As it stands today, soy is widely used in our diets  through processed foods and is found in most meat, since  soy is fed to animals on concentrated animal feeding operations.

The next “natural step” according to Monsanto and food giant Cargill is to make soy the feed of “sustainable” choice for factory-farmed fish.   Don’t think for one minute that their desire to feed farmed fish soy has anything to do with  “sustainability.”  It has everything to do with MONEY!

Like the land-based concentrated animal feeding operations, industrial fish farming has had problems from its inception,  including overcrowded conditions, pollution and unnatural diets.   Feed has also been an area of controversy as sometimes wild fish are used to prepare the fish meal fed to farmed fish, depleting the natural fish supply in some areas.

In September 2011, the Illinois Soybean Association announced that soy feed could “revolutionize sustainable agriculture” on fish farms and are anxious to throw caution to the wind and start lining their pockets to the tune of around $201 million a year.

But just as soy has been detrimental to land-based food lots, human health and the environment, it could be just as devastating to our oceans and seafood.  Soy is not a natural food found in the oceans and as such could pose a serious risk of pollution, a lack of nutrient content in seafood, threaten wild fish populations, damage coastal communities, and will most definitely contaminate  the oceans with herbicide saturated GM soy.

While the soy industry stands to make large profits there is no guarantee that soy based aquaculture feed can consistently produce healthy fish or promote ecological responsibility.  In fact, by causing fish to produce excess waste, soy could lead to an even more polluting fish farming industry.

Rather than actually promoting sustainability in a developing industry, the involvement of soy associations in aquaculture could spur the growth of two industries that have extremely negative impacts on our land, our oceans and the communities that depend on them.

So what’s a few problems with so much money involved?

Increased Pollution:  Fish fed soy produce more waste than other fish – more pollution the ocean is not set up to handle.  GM soy is invariably contaminated with residues of potent glyphosate-based herbicide formulations such as Roundup which a growing body of research clearly shows is extremely toxic to aquatic life.

Contamination of the oceans and seafood:  About 94% of the soy grown in the U.S. is genetically modified.  And when you feed farmed fish raised in an ocean environment, any feed that is not consumed flows directly out of the cage and into the ocean.  Feeding soy to farmed fish means that GM food will enter the environment and diets of wild marine organisms, permanently contaminating the oceans.

Monsanto and Cargill will have control of seafood:  Monsanto which has sponsored feed trials with GM soy and salmon, is already keen on spreading their GM seeds “from sea to shining sea.”  Cargill which has an aquaculture feed division, is another industrial food giant.  By bringing soy into fish farming, their research will now extend into issues concerning the sustainability and future of marine life.  The cultivation of GM soy is associated with agricultural runoff that is already contributing to the dead zones in the Gulf of Mexico and the long-term effects on human consumption are staggering.

Deforestation:  Large quantities of South American land are already being cleared to make way for soy farms.  This could increase even more if soy is approved for fish food.

According to Food & Water Watch, “The American soy industry is powerful.  It has been able to fund many studies in using soy for fish feed; it has built relationships in the aquaculture industry; and has publicly supported federal policies in favor of offshore aquaculture.

In April 2010 researchers at Russia’s Institute of Ecology and Evolution of the Russian Academy of Sciences and the National Association for Gene Security found that after feeding hamsters GM soy for two years over three generations, by the third generation, most lost the ability to have pups.

In 2009 a Brazilian study looked at the impact of soy on the reproductive system of female rats fed GM soy for 15 months.  All showed significant changes in their uterus and reproductive cycles.

The only published human feeding study on GM foods ever conducted verified that the gene inserted into GM soy transfers into the DNA of human gut bacteria and continues to function.  This means that years after you stop eating GM soy, you may still have a range of potentially allergenic proteins continuously being produced in your intestines.

The FDA has been in the pocket of Monsanto for years.  Through attempted Congressional action on the 2012 farm bill and the 2013 Agricultural Appropriations Bill it looks like  some members of Congress are also in Monsanto’s back pocket.    Now this.  Once they get their grubby hands on the aquaculture business they will pretty much control our entire food supply.