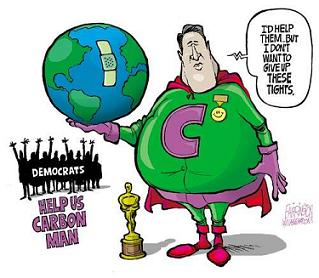 Big Al Gore is back pushing more rubbish about global warming.  “People and the world are suffering from the consequences of the droughts, and the heatwaves, and the flooding events and unprecedented wind storms and the fires. Globally, nine out of 10 of the hottest years ever measured have been within the last ten years.  It’s like a nature hike through the Book of Revelations.”

Satellite, balloon and mountain top observations made over the last three decades have not shown any significant change in the long term rate of increase in global temperatures.  Average ground station readings do show a mild warming if 0.6 to 0.8 C over the last 100 years but ground station networks are unevenly distributed across the globe, and usually located in growing urban and industrial areas so their data is iffy.

The Medieval Warm period from around 1000 to 1200 AD was followed by the Little Ice Age.  Since the end of the 17th Century the average global temperatures has been rising at a low steady rate even though from 1940 to 1970 temperatures actually dropped, leading to a Global Cooling scare.

CO2 has increased since the beginning of the industrial revolution from 0.2% to the present 0.4% per year which has been pretty constant for the last twenty five years.  Measurements in ice cores dated over many thousands of years show CO2 levels move up and down after the temperature has done so and is therefore the result of warming, not the cause.

Nobel Prize winning physicist Ivar Giaever, a supporter of Obama in 2008, publicly resigned from the American Physical Society because of their claims on global warming.  In spite of the international campaign to enforce the message, large numbers of scientists, many very prominent, share Dr. Giaever’s position.  And, the number of scientific “heretics” is growing with each passing year.  The reason – a collection of stubborn scientific facts.  Perhaps the most inconvenient fact is the lack of global warming for well over 10 years and the smaller than predicted warming over the 22 years since the U.N. IPCC began pushing their scam.

Alarmism over climate change is of a great benefit (riches) to many.    Alarmism offers an excuse for governments to raise taxes and hire more bureaucrats, give taxpayer funded subsidies to businesses that understand how to work the system, and is a giant lure for donations to charitable foundations that promise to “save” the planet.

Flooding, fires, wind storms, heatwaves and droughts have been around forever  –  they’re even mentioned in the Bible.  There is no scientific or statistical evidence whatsoever that supports your theory that global warming causes them.

Even if we were at that point -five months  doesn’t leave you and the U.N.  much  time to steal even more taxpayer dollars.

← Dishonest Liberals
Dept. of Veterans’ Affairs Party As Injuried Are Left In Limbo →