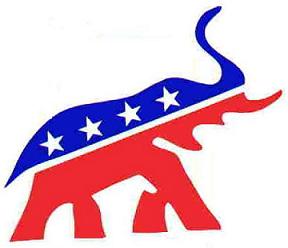 Finally, someone in the GOP has started paying attention – or is, at least attempting to  galvanize the tea party vote.  In the draft GOP platform released by Politico, Republicans are  rejecting a number of U.N. treaties that the Obama administration have been pushing.

“Under our Constitution, treaties become the law of the land.  So it is all the more important that the Congress – the Senate through its ratifying power and the House through its appropriating power – shall reject agreements whose long-range impact on the American family is ominous or unclear.  These include the U.N. Convention on Women’s Rights, the Convention on the Rights of the Child, the Convention on the Rights of Persons with Disabilities, and the U.N. Arms Trade Treaty, as well as the various declarations from the U.N. Conference on Environment and Development.  Because of our concern for American sovereignty, domestic management of our fisheries, and our country’s long-term energy needs, we have deep reservations about the regulatory, legal, and tax regimes inherent in the Law of the Sea Treaty and congratulate Senate Republicans for blocking its ratification.  We strongly reject the U.N. Agenda 21 as erosive of American sovereignty, and we oppose any form of U.N. Global Tax.”

Agenda 21 is nothing short of a Social Justice agenda controlled by the United Nations, as are most of the U.N. treaties.

The GOP platform also states that to “shield members of our Armed Forces and others in service to America from ideological prosecution overseas, the Republican party does not accept the jurisdiction of the International Criminal Court. . .”

Will they  stand behind their platform  if they win the election this November?  Yes, I truly believe they will.

← Avid Hunter Paul Ryan Supports 2nd Amendment
Is The Government Smarter Than You? →