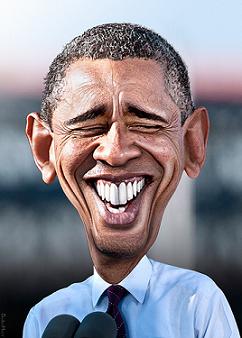 His Royal Personage, King Obama granted an interview with one of his lapdog Sunday supplement magazines.

In his delusional state, Obama informs us that  “Republican voters often agree with me” because my  approach at government has been “consistent” from the start of my term.  Consistent yes – he’s been never-wavering  in his attempt to destroy the American economy and American way of life  since the day he took the oath of office.

These proposed consistent policies “used to be embraced by Republicans.”    Rinos – yes,  conservative Republicans – NO WAY.

“I think after this election, we’ll be in a position to once again reach out to Republicans and say that the American people have rendered a judgment and the positions we’re taking are well within what used to be considered bipartisan centrist positions.”   I think he’s been into Nancy’s botox.  The only place his polices would be considered centrist is in Russia.

“Being Black has made me more determined in assuring that everybody gets a fair shot. . .”   That only applies  if you’re a Black Panther, a far left field activists,  or a Muslim.    If you’re a Black Conservative Republican that opposes his homosexual agenda, or abortion you’re an Uncle Tom or Aunt Tom.  And, if you happen to be White, a Conservative or a Christian, you’re a racist, gun toting, redneck bigot.  If you happen to be a returning Veteran, White or Black – you’re a terrorists.

Obamacare is one of his “proudest achievements” because “families who are looking for more work, once we get health care fully implemented, won’t have to fear that they’re going to lose their home if they get sick.”  More work?  How about any work?  They certainly don’t have to worry about losing their homes to an illness because if Obama gets another 4 years, they won’t have a home left to lose anyway.

And if you wondered what Her Royal Personage, Mama Michelle plans for a second term – the usual – sticking her nose even deeper in making certain your children eats what she says, when she says, along with furthering women’s heath issues around the world.  There are still a few countries out there that refuse to pass laws to allow the murder of innocent babies.

← The Mark of Tim Kaine
AN ISLAMIC STATE →