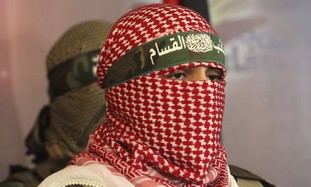 Hamas was founded by Sheikh Ahmed Yassin, a Palestinian cleric who became an activist in local branches of the Muslim Brotherhood after dedicating his early life to Islamic scholarship in Cairo.  Yassin established Hamas as the Brotherhood’s local political arm in December 1987, following the outbreak of the first intifada, a Palestinian uprising against Israeli control of the West Bank, Gaza, and East Jerusalem.  The following year Hamas published its charter, calling for the destruction of Israel and the establishment of an Islamic society in historic Palestine.

In a video in 2010, Hamas bragged that the “Jews have become abhorred and loathed outcasts because they live off corruption and the plundering of the peoples – not only the Arab and Islamic peoples, but all the peoples of the world. . .The entire world says: Bravo, Hamas, for confronting these people of corruption. . .Hamas will receive its means of survival, its arms, and its supporters from where it is least expected, because the hatred for the Jews is on the rise, and people who hate the Jews find no way to fulfill their hatred of the Jews and of the Americans – the Americans too have become abhorred throughout the world because of their corruption, for they are led by the Jews.”   Here is a link to the video.

Very few Palestinians have been in the Holy land for generations.  Most are from various isolated families, tribes and groups with no common history.  Either they came with invading armies, or were imported as cheap labor by the Turks and British, or wanted to profit from the economic advances made by the Israelis who had returned to rebuild their homeland. Others fled to Palestine from neighboring Arab countries because they were involved in blood feuds and feared for their lives.

The random collection of people who call themselves Palestinians were originally ruled by different occupiers, primarily the Ottoman Turks. The population was divided and driven by disagreement, and came to look upon itself as a national group only at the beginning of the 20th century.  And unlike the Jewish people, the Palestinians are not even documented in the their Qur’an or the Old and New Testaments.  There is no documentation of their presence in Palestine, in the history books of the ancient or modern world or in books written by travelers who came from overseas over the centuries, such as Mark Twain’s Innocents Abroad.

With the ongoing wars in the Middle East to unite the Muslim world under ISIS, terrorists have had less time to devote to their war against Israel.  But not to worry, Europe and America have taken up the slack.    Not too long ago, the UN Human Rights Council voted to launch a commission to criminalize Israel for the mere existence of Israeli communities beyond the 1949 armistice lines.   This kangaroo court was the consequence of the European diplomatic war against Israel.  They barred Israel from caucusing with its UN regional group – the Western European and Others Group, which effectively barred Israel from making its case to other UN member nations.  Obama joined forces with the anti-Israel council and refused to use American membership as leverage to coerce the council into abandoning its campaign against Israel, but, the US did manage to vote against one of the 5 anti-Israeli resolutions.

In October of 2016 the UN’s Educational, Scientific and Cultural Organization (UNESCO) gave preliminary approval to a resolution that denied Jewish ties to its most holy religious sites: the Temple Mount and the Western Wall.  The vote in Paris could firmly establish the Temple Mount as a Muslim place. Since UNESCO’s rewriting of history, by renaming ancient Biblical sites Islamic, such as Hebron’s Cave of the Patriarchs and Rachel’s Tomb near Bethlehem, even though there was no Islam until the seventh century A.D., Muslim guards on the Temple Mount have already imposed UNESCO’s revisionist agenda.   Cardinal Marx and Bishop Bedford-Strohm, Catholic and Protestant representatives of the German Churches, accepted orders to remove their crosses,  while visiting the Temple Mount.  After huge protests in Germany against the banning of the cross on the Temple Mount, Cardinal Marx apologized but Bishop Bedford-Strohm, not only didn’t apologize, he attempted to blame Israeli security, rather than Islamic security.

Obama’s latest attack against Israel occurred in December 2016 when he refused to use the U.S.’s veto power to stop the U.N. Security Council Resolution 2334 that politically reinforced UNESCO’s October attempt to erase the history of Israel in its homeland in order to replace it with the Koranic version of the Bible.  In keeping with the UN’s long-established pattern of anti-Israel bias and discrimination, Resolution 2334 states that Israel’s settlements in territories captured during the 1967 war that includes East Jerusalem are a flagrant violation of international law and has no legal validity and demands that Israel stop such activity and fulfill its obligations as an occupying power under the Fourth Geneva Convention.

In truth, there is nothing new about the West’s rejection of Israel’s right to sovereignty.   Animosity predated not only the 1967 Six Day War but the establishment of Israel itself.    British Colonel Richard Meinertzhagen, who served as an intelligence officer  in wartime and post-World War I wrote in his memoir Middle East Diary that the first Arab terror assaults on Jews under the British military government were instigated by the British military.  Just prior to Passover in 1920, British military authorities contacted future Nazi agent Haj Amin el Husseini and encouraged him to attack the Jews of Jerusalem.  They told Husseini that “he had a great opportunity at Easter to show the world that the Arabs of Palestine would not tolerate Jewish domination in Palestine and if disturbances of sufficient violence occurred in Jerusalem at Easter, the British High Commanders would advocate the abandonment of the Jewish Home.”  Haj Amin took the Colonel’s advice and instigated a riot.  The British withdrew their troops allowing the Arab mobs to attack the Jews and loot their shops.

The United Nations and the world’s leftist elite are using the Palestinians to beat Israel into submission.  But why?  The core of the problem is that Palestinian recognition of Israel as the state of the Jewish People would not only end the dream of the return to Palestine, but also of the destruction of Israel currently being implemented through the incitement and terrorist campaign waged by the Palestinian people in their institutions, mosques, schools, terrorist organizations and foreign propaganda centers. Their strategic intention is to perpetuate the conflict, not end it.

Every Muslim knows that the Jews in Israel are the descendants of the ancient Hebrew nation known as the Israelites and they also recognize the fact that the Jews have had a common identity for nearly three thousands year, even before the Romans conquered Judea and changed its name to Palestina, as attested to by history. The ties of the Jews to the Holy Land have been documented by all the sacred books, including the Qur’an.

So, instead of recognizing Israel’s right to exist, or accepting a deal of mutual recognition that will lead to a life of peace, the terrorists organizations, the far-left NGOs, the United Nations, and even the U.S. under Obama’s reign, are willing to gamble with the fate of these people and their children’s future.