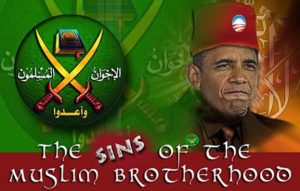 In February 2016,  the US House Judiciary Committee approved legislation calling on the State Department to designate the Muslim Brotherhood a foreign terrorist organization. Of course John Kerry chose to ignore the request even though Egypt, Saudi Arabia, the United Arab Emirates and the UK had already declared them as such.  In November Walid Phares, a top-foreign policy adviser to U.S. President-elect Donald Trump, said that Trump would be willing to sign such a bill.

In response, Republican Senator Ted Cruz, along with 4 cosponsors introduced S 68, The Muslim Brotherhood Terrorist Designation Act of 2017, in January of this year. The bill was referred to the Senate Committee on Foreign Relations chaired by Republican Senator Bob Corker of Tennessee. With 11 Republicans and only 10 Democrats on the Committee they have no excuse not to put the bill on the floor for a vote. The House version, H 377 was introduced by Republican Congressman Mario Diaz-Balart of Florida and also referred to Committee.

Of course the left has gone bonkers thinking we dare call such a lovable, peaceful organization terrorists. One left-wing nut, Benjamin Wittes of the Lawfare blog went so far as to suggest such a declaration would be illegal because there isn’t any way to “assess the strength of the ties between the international organization and the various chapters” because of the “organization’s penchant for secrecy.” What?  How secret could those ties be when in 2010 they published their by-laws on their website stating that organizations affiliated with them must “abide by the higher leadership’s decisions” and are “obliged to get approval prior to making any import political decision.” In addition, all affiliated organizations must file “annual reports and pay an annual subscription.”

Becoming not only the oldest but one of the largest and most influential Sunni Muslim organizations in the world the Brotherhood have, since their inception in 1928, been in and out of favor with the Egyptian government. In 1954 they attempted to assassinate President Nasser and were outlawed even though allowed to operate under cover of darkness until 1970 when Sunni supporter Anwar Sadat came into power. Unfortunately for him, when he struck a peace treaty with Israel in 1981, the Brotherhood joined forces with other disgruntled Sunnis and assassinated him, proving no good deed goes unpunished

The Brotherhood spread their claws into the U.S. in the mid 1960’s as hundreds of Muslims came to supposedly study in Midwestern universities. The first front group for the Brotherhood in the US was the Muslim Student Association founded in 1963.  As more and more students from the Middle East came to the U.S. the Brotherhood grew and formed plans to dominate the U.S. In 1982 they adopted a 14 page strategic master plan to “establish a cultural invasion of the West using immigration, infiltration, surveillance, propaganda, protest, deception, political legitimacy and outright terrorism.”   Under Obama’s rule this almost came to fruition.

At a 1995 conference in Toledo Ohio, their spiritual leader Yusuf al-Qaradawi vowed that Islam would “conquer Europe and America, not through sword but through Da’wa [proselytizing]. As an added bonus, he urged Muslims in the US to “continue to fight the Jews and kill them.” You can read The Muslim Brotherhood’s ‘General Strategic Goal’ for North America at this link.

The Brotherhood is a Sunni terrorist organization. As early as 1988 HAMAS identified themselves as the Palestinian branch of the Muslim Brotherhood. In 1993 the House Task Force on Terrorism and Unconventional Warfare reported that various branches of the Brotherhood regularly took part in conferences of al-Qaida, Hamas, Hezbollah and the Iranian Revolutionary Guard Corps.

Richard Clare, counterterrorism “czar” to both Wild Willey and GW Bush testified in October 2003 that a common link was shared by al-Qaida, Islamic Jihad and Hamas with the Brotherhood which was also recognized in the 9/11 Commission Report. Mohammed Atta, ringleader of 9/11, was part of the Brotherhood’s engineering syndicate in Egypt. On June 26, 2003, Steven Schwartz, author of “The Two Faces of Islam: The House of Sa’ud from Tradition to Terror,” testified before the U.S. Senate Subcommittee on Terrorism, Technology and Homeland Security about Wahhabism [Muslim Brotherhood] which he described as the most extreme, separatist and violent form of Islam and how they had come to dominate Islam in the United States.

The Senior clerical leadership of the Brotherhood led by Qatar based top dog Yousef al-Qara, issued a fatwa in 2004 authorizing the murder of Americans in Iraq. In 2007 and 2008 the GW Bush’s Justice Department successfully argued in federal court during the Holy Land Foundation trial that the Brotherhood had directed its affiliates in the US to organize money and men for Hamas.

In 2013 only 4 Sunnis Muslim groups were responsible for 66% of all terrorist attacks. These Sunni groups included Hamas, Boko Haram in Nigeria, al-Quada, the Taliban in Afghanistan and Pakistan and ISIS, all part of the Muslim Brotherhood.

Since the Brotherhood controls about 80% of American mosques, they control property, buildings, training and appointment of imams, content of teaching which includes the faxing of Friday sermons from Saudi Arabia and literature distributed in mosques. Similar influence extends to prison and military chaplains, Islamic elementary and secondary schools, college campuses, endowment of academia chairs and programs in Middle East studies and most notoriously, charities helping Muslims abroad many of which have been linked to or designated sponsors of terrorism.

The main goal of the Brotherhood throughout the world is the implementation of sharia law to further their goal of establishing a global caliphate. Under sharia, our Constitution would cease to exist as it is a totalitarian ideology that controls all aspects of life. It discriminates against women, deprives people of all freedom of expression and association, criminalizes sexual freedom, and incites hatred and violence against people of certain social groups. As manifested in countries ruled by Islamic law, sharia condones or commands abhorrent behavior, including underage and forced marriage, honor killing, female genital mutilation, polygamy, domestic abuse, and even marital rape.

Through stealth jihad, the Brotherhood seeks to impose Islamic values and customs on the West gradually, incrementally gaining ever-greater influence over our culture. And the only way to stop them is to outlaw their existence within the United States.  Please contact your Representatives and demand they bring S 68 and H 377 to a vote on the floor.  It is time to pull our heads out of the sand – the Muslim Brotherhood is a terrorist organization that our former president was proud to use to help bring America to her knees.

“Why is it acceptable to say that Russia would try to influence our policy, but it is bigoted to suggest that the Brotherhood—the largest Islamist movement in the world—would do the same?”  Ryan Mauro

For more information on the Muslim Brotherhood read:  The Wahhabi Soft Jihad; ISIS: The Turbo Wahhabis; The Wahhabi Invasion; Islam: The Religion of Peace

2 comments for “How Peaceful Is the Muslim Brotherhood?”