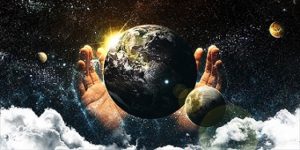 The God Delusion by Richard Dawkins, published in 2006, was an attempt to disprove the existence of God. To his dismay, however, the book did more to prove what a vile, contemptuous human being Dawkins actually is.

The only reason people [Christians] try to be good according, according to Dawkins,  “is to gain God’s approval and reward” which he claims is not morality at all, just some people “sucking up, apple-polishing,”  looking over their  shoulder at the “great surveillance camera in the sky” at some God who is “monitoring your every move, even your every base thought. Belief in God is “pseudoscience, a security blanket, a thumb to suck, a skirt to hold…”  Religion doesn’t give consolation and inspiration to people in need, indeed, Dawkins believes these “needs are much better filled by philosophy and science, by an atheistic worldview that is more life-affirming than any religion.”

To sum up Dawkins book, this nonexistent God “is a vindictive bloodthirsty ethnic cleanser, a misogynistic, homophobic racist, an infanticidal, genocidal, pestilential, megalomaniacal, sadomasochistic, capriciously malevolent bully.”  A lot of big words for such a little man!

Not to let Dawkins have the final word, Paul Rosenberg,  in an article posted on Salon.com, claims a new “theory” of life will “have Christians terrified.”  Created by  MIT scientist Jeremy England, this new theory is based on thermodynamics which “proposes” that the  emergence of life was not accidental but necessary.  England claims that matter inexorably acquires the key physical attribute associated with life.  In perspective, Jeremy is telling us life emerged through necessity following the laws of nature from “nothing.”  “If you start with a random clump of atoms and you shine light on it long enough, it should not be surprising that you end up with a plant.”  Of course, like most atheistic scientific theories, no explanation was given for the existence of energy or that random clump of atoms!

England’s theory that life began from necessity isn’t that new or even exciting.  According to Mara Prentiss, a Harvard professor of physics, “as an organizing lens, I think he [England] has a fabulous idea. Right or wrong, it’s going to be very much worth the investigation”. In other words, England’s theory is just the latest in another long line of best guesses that must be verified, and I wouldn’t hold my breath waiting.

I find it rather funny that Rosenberg is so giddy with the prospects of putting Christians on notice. His article isn’t as much about science as his hatred of the Christian right. He begins  his article by claiming that Christians “hate” Darwin because he explained evolution in a way that didn’t require the existence of God. I might add, Christians don’t hate Darwin, we’re just smart enough to know his theory, or best guess, is too full of holes to take seriously.  It is a guess that has never been proven and never will be proven.

Rosenberg then adds that “if” England’s theory works out, it will be a fitting rebuke to “pseudo-scientific creationists,” who have long mistakenly claimed that thermodynamics disproves evolution. “Creationists often cast themselves as humble servants of God and paint scientists as arrogant, know-it-all rebels against him [God]. But, surprisingly, they’ve got it all backwards, once again. England’s work reminds us that it’s scientists willingness to admit our own ignorance and confront it head on – rather than papering over it – that unlocks the great storehouse of wonders we live in and gives us our most challenging, satisfying quests.”

How odd that someone so into science doesn’t realize that natural sciences grew out of Christian culture. It flourished in societies where a Christian mindset understood nature to be ordered and intelligible, the work of an intelligent Creator. Far from being an obstacle to science, Christian soil was the necessary humus where science took root.

Why the left feels this overwhelming desire to destroy something they claim doesn’t exist in the first place is beyond me. God has shown himself to be very resilient against the left’s slander and I dare say he will not give this latest attack a second thought. It may even provoke a chuckle or two!

← If I Wanted America To Fail
Which “New Normal” do You Mean? →