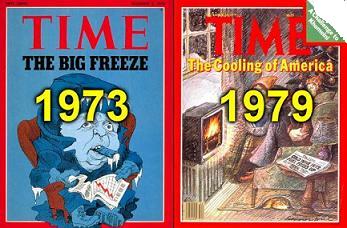 Paul Driessen writes that back in the 1970s many scientists feared a new ice age caused by fossil fuels would cause glaciers to expand.  A 1975 Newsweek cover story reported that “the earth’s climate seems to be cooling down.”  Meteorologists are “almost unanimous” that the trend will “reduce agricultural productivity for the rest of the century,” and “resulting famines could be catastrophic.”

The tales of doom and gloom are still the political and lapdog media standard fare even after Michael Mann’s hockey stick graph was dissected and ClimateGate made us aware of the shenanigans and duplicity of the U.N. Intergovernmental Panel on Climate Change.

Man-made global warming, climate change and weird weather remain the foundation of political agendas for ending our “addiction” to oil, usher in a new era of “eco-friendly” renewable energy and “fundamentally transforming” our economy and society.

Their power, prestige, control and access to billions of taxpayer dollars ($68 billion since 2008 according to the Congressional Record) for biased research and crony-corporatist schemes super-glue environmentalists, five-alarm climate scientists and renewable energy companies to these disaster claims.

Since Congress rejected cap and trade, Obama has used the EPA to issue thousands of pages of regulations designed to terminate coal-based electricity generation and impose a true-believer view that carbon dioxide must be drastically reduced to prevent a global warming Armageddon.  Subsidized researchers are desperately trying to tie every conceivable phenomenon and event to global warming.

But by making fossil fuels scarcer and much more expensive, while wasting billions of taxpayer dollars to subsidize wind, solar and biofuel energy,  the EPA’s war on fossil fuels is forcing Americans to abandon the energy sources that power our economy.    Obama wants to force Americans to switch to unreliable, impractical, expensive, job-killing wind, solar and biofuels that emit less CO2.

Natural Scientist Dr. Willie Soon and meteorological statistician William Briggs note that changes in solar radiation caused by sunspots have changed Earth’s temperature and climate for centuries.  Even the University of California’s Berkeley Earth Surface Temperature project data are “consistent with the hypothesis that the sun causes climate change, especially in the Arctic, China and the U.S.  The data also clearly invalidates the hypothesis that carbon dioxide is the most important cause of observed temperature changes across the United States.

Other analysts have shown that neither average global temperatures, nor tornado and hurricane frequency and severity, nor droughts, rainfall, sea level rise, nor Arctic climate, ice and weather patterns in recent decades differ measurably or significantly from historic norms, cycles or variations.

Obama is fulfilling a campaign promise  – he is “fundamentally transforming America.”

The Obama administration and Congress have already implemented draconian laws and regulations that made energy less reliable and affordable, destroyed jobs, weakened national security, made us even more dependent on imports, raised consumer prices which has  slowed our economy growth.  Their needless laws and EPA regulations are prolonging the recession, keeping unemployment high, impairing our civil liberties and hurting the poor, minority and elderly families most of all.

You can read the full article at this link.

← Take A Walk With Obama
How To Steal An Election →