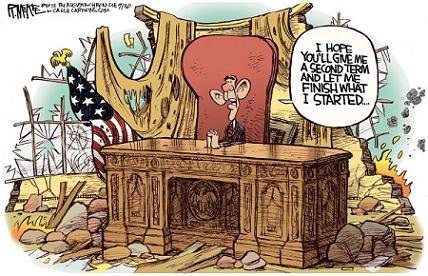 Beginning in 2013 American families will face an EPA  regulatory onslaught that will drive up energy prices, destroy millions of jobs and further weaken the economy, making 2012 look prosperous  in comparison.

Carol Browner, Obama’s former global warming czar and now chief campaign advocate promised the radical environmentalist they needn’t worry because they will  get what they want.  “I can tell you, having spent two years in the White House with the president, that this is not a fad.  The president believes deeply in these issues.  At every turn he has looked at what are the tools available to him to really build a clean energy future for this country and has been committed throughout his first four years in office, and thre’s no doubt in my mind this will be a big part of his to-do list and he will remain committed into the next four years.”

Browner is referring to the slew of job-killing EPA regulations that Obama put on hold until after the election so he could secure another 4 years.

Greenhouse Gas Regulations:  These regulations, which Obama personally warned would be worse than global warming cap and trade legislation, will be an enormous burden costing more than $300 to $400 billion a year to implement and will significantly raise gas prices and utility bills.   Once the regulation is implemented against coal fired power plants, the EPA will expand the rules to churches, restaurants, schools, hospitals and eventually farms.   The EPA is proposing a “cow tax” – a cost per animal that, based on the EPA’s estimates will cover 37,000 farms and ranches subject to greenhouse gas permits at an average cost of $23,000 per permit annually, affecting over 90% of the livestock production in the U.S.

Ozone Rule:   Obama admitted to the NY Times last year that tightening the ozone standard would harm jobs and the economy.  The EPA estimates that new ozone standards will cost $90 billion a year while other studies have projected a cost of upwards of a trillion dollars and the destruction of 7.4 million jobs.  The new standards will put 650 additional counties into the category of “non-attainment” which is the equivalent of posting a “closed for business” sign on communities.

Hydraulic Fracturing:   There are no less than 14 federal agencies that include the EPA, the Department of Energy, the Bureau of Land Management, the Center for Disease Control, the Department of Agriculture and the Securities and Exchange Commission working to find ways to regulate hydraulic fracturing at the federal level in an attempt to limit and eventually stop the practice.  The Bureau of Land Management is set to finalize new regulations before the end of the year which have serious impacts on domestic energy production.  According to one study, “the total aggregate cost for new permits and well work-overs resulting from this rule alone would range from $1.499 billion to $1.615 billion annually.

In the months following the election expect the EPA to issue guidance for the usage of diesel fuels during hydraulic fracturing which will  strip states of the primacy granted through the Safe Drinking Water Act; complete a study unsupported by state and federal agencies linking hydraulic fracturing to water contamination in Wyoming; answer countless petitions filed by radical environmental organizations potentially leading to the back door regulation of hydraulic fracturing through the Toxic Substance Control Act, Resource Conservation and Recovery Act and the Clean Air Act.   Then they can introduce Effluent Limitations Guidelines for both shale gas extraction and coal-bed methane.

Florida Numeric Nutrient Criteria:   In 2009 the EPA issued a Clean Water Act determination that it would set federal numeric nutrient water quality standards for Florida which was criticized for being technologically and economically infeasible.  Florida issued their own nutrient criteria  and petitioned the EPA to withdraw their determination and refrain from any further numeric standards.  A Florida administrative law judge ruled in 2012 that Florida acted within its authority and Florida certified its new standards on June 13, 2012.  They submitted it to the EPA for approval but even thought the EPA had only 60 days to approve the rule or 90 days to disapprove of it, nothing!

EPA’s Water Guidance:  The EPA’s proposed new guidelines for water covered under the Clean Water Act will expand federal control over every body of water in the U.S., no matter how small which would result in new guidelines, regulations and responsibilities for states.

Stormwater Regulation:   As part of the Chesapeake Bay Settlement Agreement the EPA has proposed new nationwide stormwater rules which would expand the universe of federally regulated stormwater, establishing new standards for post construction runoff; require first time retrofit requirements on stormwater systems to  include mandates on cities to change existing buildings, stormwater sewers and streets and use “green infrastructure” techniques like green roofs, rain gardens, permeable pavement, etc to replace conventional stormwater practices.  These regulations also will apply to anyone who owns property or wants to develop property.   It could be the most expensive regulation in EPA history.

Tier III Gas Regulations:  Tier III will reduce the content of sulfur in gasoline from 30 ppm to 10 ppm costing up to $10 billion initially and $2.4 billion annually.  It could add up to 9 cents per gallon in manufacturing costs.

Boiler MACT Rule:  This  new rule is  so strict that no one can meet them –  so companies will have no choice but to shut their doors and ship manufacturing jobs overseas.  The rule has been projected to reduce U.S. GDP by as much as $1.2 billion and destroy nearly 800,000 jobs.

Cement MACT Rule:  This new rule could cause 18 plants to shut down throwing 80,000 workers out in the cold.  As more and more cement has to be imported, concrete costs for the construction of roads, bridges and buildings will increase 22 to 36 percent.

316(b) Cooling Tower Rule:  This rule will require strict protections for fish in cooling reservoirs for power plants under the Clean Water Act.  EPA estimates it will cost between $384 million to $460 million a year.

Farm Dust Regulation:   That’s right – the EPA plans on regulating dust on farms.  This would have widespread implications for rural America and our food supply.

Spill Prevention Control:  This rule would require farmers and ranchers to develop and implement costly oil and gasoline spill prevention plans adding to the destruction of family farms and the increase in food prices.

All of this is on top of Obama’s war on coal.  The EPA continues to stall the permitting process and are actively trying to stop permits that have already been granted.    Arkansas, Louisiana, Michigan, Missouri, Montana, North Dakota, Ohio, Pennsylvania, Tennessee, Virginia, and West Virginia will be devistated.

With so many jobs at stakes, the EPA has been trying to claim that coal fired electricity generation is dwindling because of natural market forces, due to the cheaper price of natural gas.  But Administrator Spalding told the truth  – Thanks to the EPA, there will be no new coal plants in the U.S. and coal’s demise will be painful – “painful every step of the way.”

2 comments for “Obama’s 2nd Term War Plan Against Everyone”