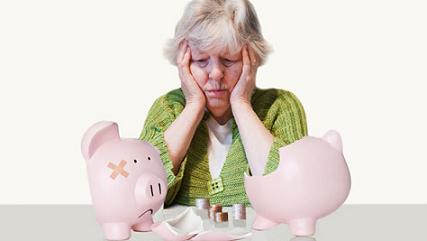 It is hardly a secret that the federal government is growing at an accelerated pace even as our economy contracts.  Government cannot sustain itself on the back of the existing tax base.  Our government is surviving because there are foreign countries still willing to purchase our debt, at least for now,  and the ability of the Federal Reserve to carry out currency and bond market manipulations.  Obama’s solution to the government’s financial woes is NOT to have Washington live within its means – Obama’s solution is to raise revenue by any means necessary  – borrowing, printing, buying our own debt and stealing it.

When government gets desperate they scheme to change the incentives and rules to milk more money out of what few taxpayers are left.  But even if they stole all the wealth they couldn’t buy us out of a paper sack.  No, Washington needs a solution and that solution is to raid the biggest source of untapped revenue in the country – our private retirement.  According to 2010 figures, some 69 million Americans own and control 401(k) retirement funds valued at about $4 trillion.  If you add in the IRA’s, HSA’s and other vehicles through which Americans hold retirement assets – the total runs to around $15 trillion.  Of course since 2010 that total has dipped due to retirements and the failing economy.

As promised, Obama’s 2013 budget proposal looks to increase taxes on the rich.  There are also changes to retirement options and plans that could have a direct impact on your “golden years.”

Obama would limit itemized deductions and other tax preferences for high income taxpayers ($250,000 for families and $200,000 for singles) limiting deductions to a maximum of 28%.  This would apply to all itemized deductions – foreign income, tax exempt interest, employer sponsored health insurance and retirement contributions.   Under current law there is already a $250,000 cap on compensation used to calculate contributions to 401(k).  Obama’s proposal doubles down on this limit for 401(k) plans and takes an ax to tax incentives that encourage small business owners to offer this retirement plan.   Remember, the majority of small business owners pay taxes on business profits at personal tax rates, not corporate rates.  This one change could discourage small business owners from even offering 401(k) options.

Another Obama proposal would force employers who don’t offer a retirement plan to enroll employees in a direct-deposit IRA.  Employers with 10 or less employees are exempt and employees may opt out.   I haven’t seen any specific plans on the types of direct-deposit IRAs but I have a suspicion they would be similar to  Guaranteed Retirement Accounts pushed by the far left which would put control into government hands.

In addition to Obama’s proposals, the  Department of Labor and the Treasury Departments have announced executive actions designed to “expand transparency in the 401(k) marketplace” and “broaden availability of retirement plan options.”  Both proposed actions are an attempt to push retirement funds toward annuities.  When government starts to tinker for our “good”  I get nervous.  With the passage of ObamaCare as a new federal mandate there is nothing to stop Congress or the Executive Branch from extending the collectivist principle to private retirement plans.

The problem with Annuities is that they won’t fix the retirement problem.  Many annuities have excessive costs and/or sales commissions.  At present, annuities are guaranteed by state agencies creating two problems.  First, the guarantees often have a relatively low limit such as $100,000 to $250,000 which are totally inadequate for a decent standard of living in retirement.  And, because they are state problems, they may generate problems for our highly mobile senior population.     Since life annuities are paid out over your life expectancy, will actuaries be able to predict accurately the many components needed to pay annuities?  What if life expectancies become longer than expected – what if you live longer than predicted?  What if market returns are less than expected?  What if inflation is worse than anticipated?  Annuity issuers might be bankrupted by a combination of increased life expectancies, increased inflation and reduced market revenues leaving you with zilch.

Let’s say you purchased a $100,000 traditional life annuity.  At today’s interest rates you’ll get about $5 of income per year for every $100 you contributed, or about $5,000 a year to live on.  The annual payments are adjusted for inflation.    When you die, any money that is left, belongs to the company that issued the annuity.  If you out live the annuity – too bad.   Now, government will tell you that the small return you receive will be supplemented by your social security.  Of course they now predict that social security will be broke by 2035 and then they are going to have to cut payouts to 75%.

The Department of Labor and the Treasury are leaning towards government controlled retirement.  One such proposal that keeps popping up is the Guaranteed Retirement Account (GRA)  pushed by the far-left.  Demos, a far left think tank with ties to Obama and George Soros  is now pushing a modified GRA originally prepared by Teresa Ghiralducci, who now is a Senior Fellow at Demos.   Van Jones, our friendly communist is on their board.  Their modified GRA is yet another government controlled retirement system.   Would you trust a government that put your  social security into a “pretend” trust fund and then spent that money on pork projects, to control and “invest” for your retirement?

Better yet, would you trust a socialist/communist leaning organization to have your best interest at heart?  Demos, founded in 1999, seeks a “sustainable, just, and democratic future” that “requires rethinking American capitalism as it exists today as a system of political economy”.    According to their website “if we are going to care for people and the planet, large-scale changes are needed in how Americans consume and live, how the United States structures economic activity and measures progress, and how we engage in the global economy.”

Once the government gets its hands on your retirement nest egg you can kiss it good-bye!

← Top 5 Reasons To Vote Against Obama
Allegiance to Color: Skin for Skin →