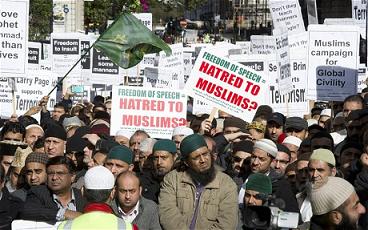 Muslims holding protests in London are calling for the suppression of free speech in the name of tolerance.  Much like Obama and Hillary have used that barely seen youtube video “The Innocence of Muslims” to “excuse”  the murder of Americans at our Embassy in Libya,  Muslims around the world are using it in an attempt to silence their critics.

Sheikh Siddiqui, in his “Campaign for Global Civility” claims  he wants to form a coalition with the Church of England, Catholics, Jewish groups, Unions and even Conservatives to encourage their rank and file to join the Muslim campaign for “civility.”  They demand that  Google  remove the video because it has “terrorized 1.5 billion people.”

The Muslim world is using that Socialist mantra – never let a crisis go to waste in their war against free speech.  On a CNN  interview in September Hina Rabbani Khar said “what we need is more tolerance for each other’s views. . .”  Turkish Foreign Minister Ahmed Davutoglu at the U.N. said it is “time to put an end to the protection of Islamophobia masquerading as the freedom to speak freely.”   Egyptian President Mursi said that “Egypt respects freedom of expression that is not used to incite hatred against anyone.”

Have you ever heard such hypocrisy?    We are not allowed to criticize Islam but they can terrorize and/or murder Christians, women, Jews, Americans, and even their own people who don’t agree with Sharia law.   In the Muslim world “tolerance” is a one way street.

As an example of their tolerance and civility, watch the video where Muslims in Libya descrate dozens of British and WWII graves in Benghazi Military Cemetery and attempt to destroy a Christian Cross.

While I could continue with quotes to disprove their civility and tolerance I decided instead to add a poem by A. Barton Hinkle entitled “The Ballad of Islamist Rage Boy.”  It pretty much says it all.

They made a movie I don’t like – at least, I’m pretty sure;  I haven’t really seen it yet; the flick is frightfully obscure.  It’s out there somewhere, though – a fact that drives me nuts.  And that is why my friends and I all hate your stinking guts.

We’d like to kill you slowly – soon, with lots of pain and blood – For letting anyone produce such narrow-minded crud.  You’ve hurt our feelings – mocked our Prophet – made us blow a gasket.  We don’t find any peace until your head is in a basket.

A stoning, for such blasphemy, might also be required by those of us who are by grace and tolerance inspired.  With sticks and stones we’ll break your bones while you complain and snivel for having the audacity to  imply that we’re uncivil.

Don’t feel too bad – it’s not just you; we also plan to slaughter any mother or her son who tries to teach a daughter math or science, prose or verse, or other learned arts.  Stultifying minds, you see, is how we capture hearts.

We shot one girl the other day – Malala is her name.  Despite the many protests, we feel not a whit of shame.  Defying us, she tried to learn, and now she’s in our debt – for she’s been taught a lesson that she will not soon forget.

We’re also torching schools when we catch them teaching girls – there’s nothing like the morning smell of smoking flesh and curls.  Our methods may be stern, but with God’s blessing we’ll persist, ‘Til every girls’ school puts a sign up reading: “Class Dismissed.”

We’re waging war as well on what we deem immodest dress.  The passions it can stir we all must instantly repress, for otherwise, one cannot tell where such things could be leading.  Without us men, the women might display improper breeding.

An inter-gender glance that lingers could ignite intense emotions that could distract a man and woman from their heavenly devotions –  Such as love, and joy, and tenderness – and others we disparage as having no befitting role within a proper marriage.

So it’s our duty to ensure the ladies all stay chaste – and those who don’t, for their own good, must quickly be defaced  – by veiling, slashing, stoning, or a simple vial of acid.  That’s the ticket that we use to keep our members flaccid.

We’ve built some scaffolds, too, for men who lie with men.  They did that once in Sodom, but won’t do it here again.  We’ll stretch their necks with solid rope we’ve twisted into nooses – that will stop those fellows cold, and dry up all their juices.

For thieves we keep a vorpal blade, for cleaving hand from arm.  Some find this quite barbaric; we think it has its charm.  Five-finger discounts, people find, aren’t nearly as much fun when, counting up your digits, you discover you have none.

Our attitude on heretics is: never, ever judge – we don’t care how they die and we will not hold a grudge, so long as they die slowly and make it hurt like hell.  If everyone can hear them scream, then we think that they’ve died well.

And then, of course, there is The Jew – that son of ape and pig whose double-dealing forces neighbors to renege on promises pre-emtively, before The Jew can do it.  The lack of peace is all his fault – no matter how you view it.

Just look around the modern world, which knew no strife or stress  until The Jew appeared to impede its happiness.  Now brothers fight with brother, and Sunni fights with Shai’a.  I’m tell you, those Euro-fascists had the right idea.

Don’t get me wrong!  I don’t concede the Holocaust was real.  It’s just a Jewish fantasy, cooked up so Jews could steal the land where milk and honey once through other fingers flowed.  The very thought makes me so mad I think I might explode.

What really gets my goat, of course, is how you all depict us: wild-eyed and waving fists, mouths twisted in a rictus.  How such a funny notion every got into your head.  Was it something that we did, or something that we said?

← Allegiance to Color: Skin for Skin
EPA’s Planned Destruction of the U.S. Economy →