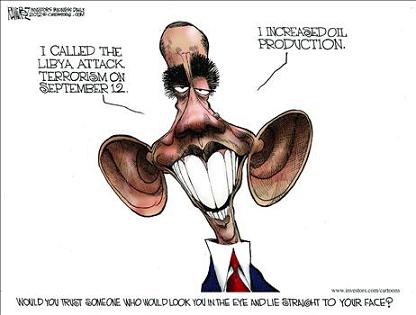 Rick Wilson at Ricochet has a very interesting take on this year’s election.  In his article “The Inflection Point”  he writes:

The aura of a losing campaign is unique – they have a certain feel to them.  They go negative hard, try out new messanging very late in the game, hype issues that only their core supporters are focused on, and try to turn non-gaffes and minor slip-ups by their opponents into massive, election-turning scandals.

Obama senses it, but can’t quite believe it.  He seems confused by how easily Romney started punching over his weight class on October 3rd.  He seems surprised that the last two debates didn’t drop Governor Romney’s numbers like a rock.  He’s frustrated that Romney is a happy warrior now, and it shows.  He’s visibly irritable because all the press hits and ads and field work. . .and so, so much money . . .haven’t reduced Romney to dust.

For months, according to Team Obama, there was no path for a Romney victory.  The Blue Wall states were immutable, the swing states were susceptible to his women-and-seniors-and-immigrants-and students mojo.  Everthing that worked in 2008 would work now.  Everthing in the hard-hitting Chicago politcal tool box would be deployed, and by the end Romney would want to be in the Witness Protection Program.

But now, as the President’s options hae narrowed and as the weight of Obama’s failures from the economy to the Libya fiasco come crashing down on his campaign, I’m feeling increasingly optimistic that we’ve passed an inflection point in the campaign where Obama’s familiar tools can’t hep him pull off a miracle. What were once silver-bullet opposition research hits have become black holes where Obama’s cash goes to die: Bain, tax returns, the Haircut of Intolerance, and Romney’s gaffes came and went.

The Obama campaign and their allies in the advocacy segment of the media pushed hit after hit to disqualify Romney, consuming countless electrons, and racking up a pricetag of hundreds of millions for the paid media portion.  Say it with me: “Worst return on Investment, ever.”

Romney is drawing stounding crowds at event after event.  Romney is drawing the kind of crowds Barack Obama pulled in 2008.  The momentum isn’t a bluff or a headfake; Republicans are lit up in the same way they were in 2010.  It’s happening in Florida, Ohio, Colorado, Nevada and all the battleground states.

Fantasy-based policy promises have also stopped moving voters.  In 2008, “Hope and Change” and “millions of new, high-paying green jobs” were met with acclaim; the new promises of Obama’s shrinking, diminished portfolio of ideas fit in a thin booklet – hilariously and unintentionally described by Glenn Thrush of Politico as “a detailed, buttet-point  play for his second term” sank without a trace in less than 24 hours.

Hollywood endorsements once added to Obama’s aura of glamour and celebrity.  Remember the absurdity of actors taking a blood oath to serve Obama for the Ten Thousand Years of His Reign?  Actors, rappers, athletes, especially Oprah, all brought Obama’s valuable, sometimes intense, news coverage.  Now, he drags a few credulous press mentions out of his Jay-Z and Kathy Perry media hits – but the people who would be moved now by a celebrity such-up are already Obama voters.

Obama’s long runing pattern of hitting his opponents with damaging, mysteriously acquired or unsealed court records seems to have fizzled with the failed Gloria Allred smear, but the Obama team still has a few stinkers in the drawer – for all the good it will do them.

Of course, these and other last minute oppo drops are coming, as are shock polls, or doom-and-gloom negtive ads, gotcha media stories and every other kind of distraction, but they won’t change the election as they might have in 2008 or in Obama’s previous campaigns.

If won’t stop Obama from trying – but it won’t stop him from losing, either.

You can Rick Wilson’s full article, at the link above.