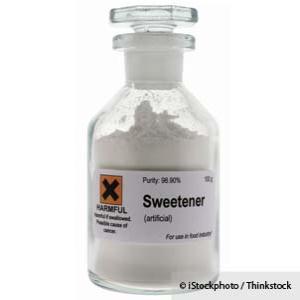 Aspartame has been approved as a safe natural artificial sweetener in more than 90 countries, but is it safe or a silent killer?

The methanol is released from the aspartame within hours of consumption in the small intestine.  Once the methyl ester bond is broken, it frees the methanol, commonly called wood alcohol.  The methanol  passes into your blood  and is converted into formaldehyde which causes the damage.

Methanol is only toxic in humans.  All other animals are able to detoxify it before it causes damage.  Methanol destroys the myelin tissue in your body.  Myelin tissue is the insulation around your nerves that allows nerve signals to travel properly.  Once it is damage, you develop demyelinating symptoms commonly seen  in diseases like MS.  It also can cause migraines that include bizarre and inconsistent visual field disruptors.

Methanol breaks down into formic acid and formaldehyde in your body.  Formaldehyde is a deadly neurotoxin and carcinogen.  An EPA assessment of methanol says it “is considered a cumulative poison due to the low rate of excretion once absorbed.  Formic acid isn’t much better.   When breathed it can cause irritation to eyes and mucous membranes.   Intravenous doses  cause central nervous depression, diuresis and causes convulsions and death.  Formic acid is used in the rubber industry as a preservative of latex; in the leather processing as a deliming agent; in nickel plating and chrome dyeing; to strip wires and prepare wires for soldering and as a acidifying agent for oil wells.

Woodrow Monte, Ph.D, R.D. director of the Food Science and Nutrition Laboratory at Arizona State University said that “when diet sodas and soft drinks, sweetened with aspartame, are used to replace fluid loss during exercise and physical exertion in hot climates, the intake of methanol can exceed 250 mg/day or 32 times the EPA’s recommendation limit of 7.8 mg/day [for Methane] consumption for this cumulative toxin.”  He also stated that animal tests do not accurately reflect the danger to humans since animals can detoxify methane and humans can’t.

Numerous studies have been conducted on the safety of Aspartame, mostly on rodents.

A study done in the 1990s raised concerns that a rise in brain cancer incidence in the U.S. was linked to Aspartame use.

The National Institute of Health in conjunction with AARP sent out questionnaires in the 1995 and 1996  to 340,045 men and 226,945 women ages 50 to 69.  Based on the food survey NIH calculated how much Aspartame was consumed from sodas or from adding it directly to coffee and tea and they found no connection between Aspartame consumption and the type or number of tumors developed in later life.

The Aspartame industry conducted its own studies that disputed any risks or dangers with the use of Aspartame, concluding that its use doesn’t cause cancer, seizures, or neurological damage, learning disabilities or contribute to obesity.   Would you expect any less?

In 2005 the European Ramazzine Foundation published its research of a long term study on Aspartame in rats that concluded that it causes leukemia and lymphoma and its use should be re-evaluated.  Of course this study was disputed by the European Food Safety Authorities that said the study was inconclusive.

In 2006 a study done by Italian scientists also showed that Aspartame might cause leukemia, lymphoma and breast cancer in rats.

A study in 2006 at the Department of Experimental Physiology, Medical  School, University of Athens, Greece implicated Aspartame with neurological problems, learning and memory loss due to the use of high or toxic concentrations of Aspartame.

The FDA, in 2006, took all these studies into consideration and agreed with the Aspartame industry studies that it was safe.

In 2007 another study on the use of Aspartame was conducted at the European Ramazzine Foundation that still indicated its dangers.  This time they started with 8 week old rats who were fed Aspartame throughout their life span.  This new study also concluded that the use of Aspartame included risks of lymphoma, leukemia, urinary tumors and tumors of certain nerves.  Their results indicated that Aspartame is a carcinogenic agent even at a daily dose of 20 mg body weight which is far less than most humans consume in their daily lives.

You guessed it – the European Food Safety Authority once again disputed the study.   The FDA also issued a statement on the study  pretty much reflecting the European Authority’s findings.  The FDA concluded that they were not presented with any scientific data to suggest they should change their initial conclusions on the use of Aspartame.

Dr. Morando Soffritti who led the Ramazzine Foundation study assailed the FDA’s decision that Aspartame was safe calling it an “example” of how some “researchers are ready to put themselves at the disposal of the industry.”  In the initial FDA study, “residents were not asked to distinguish between Aspartame” or other artificial sweeteners and the “FDA did not measure  lifetime use.”   Dr. Soffritti suggests that animal studies are a more accurate way to do a study on as it is impossible to find a comparison group of people who don’t use the sweetener at all.  “How do you do a study on humans when Aspartame is used in 6,000 products?”

A study released in September 2012 from the Department of Physiology, Institute of Basic Medical Science at the University of Madras, India,  found that there was a significant increase in lipid peroxidation levels, superoxide dismutase activity, GPx levels and CAT activity that proved that chronic exposure of Aspartame resulted in detectable methanol in the blood which may be responsible for the generation of oxidative stress and damage in the brain.  You can down load the full study at the link above.

Oxidative stress can be defined as the state in which damaging free radicals outnumber antioxidant defenses which leads to accelerated tissue and organ damage.

In March of this year another study by the University of Madras investigated the effect of long term intake of Aspartame on the antioxidant defense status in  rat brains and  found it leads to oxidative stress. Male rats fed a high dose exhibited a lowered concentration of reduced glutathione, an increased oxidative stress induced damage in the body.  The results indicate that “long-term consumption of Aspartame leads to an imbalance in the antioxidant/pro-oxidant status in the brain mainly through the mechanism involving the glutathione-dependent system.”  Glutatione deficiency has been linked to age-related diseases such as Alzheimer’s and mild vascular congestion.

Adding to the problem, one of the amino acids in Aspartame, aspartic acid is capable of crossing your blood-brain barrier where it attacks brain cells, creating a form of cellular overstimulation called excitotoxicity which can lead to cell death.

Your blood-brain barrier which normally protects your brain from excess aspartate, as well as toxins is not able to adequately protect you against the effects of Aspartame consumption because it is not fully developed during childhood; doesn’t fully protect all areas of the brain; is damaged by numerous chronic and acute conditions and allows seepage of excess aspartate into the brain even when intact.

Excess aspartate begins to slowly destroy neurons and a large majority of the neural cells in a particular area of the brain are killed long before any clinical symptoms of a chronic illness are noticed.  These chronic illnesses may include MS, ALS, hormonal problems, Alzheimer’s, dementia, hearing loss, Parkinson’s disease, brain lesions, memory loss, epilepsy, hypoglycemia and neuroendoctrine disorders.  While Aspartame consumption may not associated directly with these illnesses,  these chronic diseases may be made worse by long-term exposure to excitatory amino acid damage.