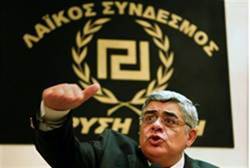 Greece’s neo-Nazi Golden Dawn party (Chrysi Avgi) has set up an office in New York City, in an effort to reach out to Greek citizens living abroad and widen its sphere of influence.

The new branch’s website features the party’s logo, which very closely resembles a swastika, across the New York skyline and reads:

“The Golden Dawn is the only political party in Greece that unapologetically stands for the sovereignty, security, and dignity of the Greek people. The party intends to reverse decades of unlimited third world immigration which has brought crime, unemployment, disease and possibly terrorism to the once peaceful Greek cities.”

“Our goals are to promote and support the Golden Dawn’s nationalist ideals and vision for Greece among the Greek diaspora. We must resist and overcome the genocidal multi-culturalist, and anti-Hellenic agenda of the New World Order,” the website continues to state.

The party has become notorious for its blatant anti-Semitic and xenophobic rhetoric and has been responsible for perpetrating attacks on Jews and foreigners.

It openly displays copies of “Mein Kampf,” as well as other works on Greek racial superiority at party headquarters.

Party leader Nikos Michaloliakos has claimed that Nazi concentration camps did not use ovens and gas chambers to exterminate Jews during the Holocaust.

The party campaigned under the slogan “So we can rid the land of filth” and holds frequent rallies, chanting “Foreigners out of Greece!”

Furthermore, the group recently held an all-Greek blood drive and released a statement at the time saying, “All the bottles of blood we collect will be handed over to patients we choose and to no one else. This right to choose belongs not just to Golden Dawn members, but to all volunteer blood donors.”

Golden Dawn claimed 18 of Parliament’s 300 seats in the elections last month, even after Ilias Kasidiaris, the party’s spokesman, repeatedly slapped a female rival during a televised debate.

A report by Human Rights Watch warned that xenophobic violence has reached “alarming proportions” in parts of Greece, and accuses authorities of failing to take the necessary steps to stop the trend. source: israelnationalnews