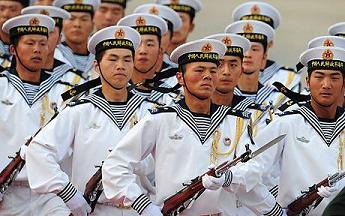 China has created a new “city” on Yongxing,  a tiny island in the South China Sea.  It is a quaint little city consisting of army barracks, a helicopter landing pad, and a six story observation tower.

This little “city” is their way of grabbing around 700,000 square miles of the valuable South China Sea much to the chagrin of Brunei, Malaysia, Vietnam, Taiwan and the Philippines, all of which have claims to the Sea.

China said they are  only exerting their claim of sovereignty over 40 islands inside the South China Sea, including lands “illegally occupied” by Vietnam, the Philippines, and Malaysia.

This is really a big deal – not only  is there  an estimated 28 billion to 213 billion barrels of oil for the taking in the South China Sea – that China seems intent on taking –   but the sovereignty of three nations up for grabs.

China also wants sovereignty over all transportation, fishing and mineral rights, which will  hamper the shipping routes of some $5 trillion in global trade along with blocking our Navy’s access to the region.

But never fear – Obama is on the job.  He has already called  for International negotiations.

China isn’t interesting in negotiating and has told the U.S. to get their nose out of the region.   It isn’t like they are scared of Obama.  They know he isn’t going to say or do anything that might risk a military confrontation.    Unlike John Kennedy in the Cuban Missile crisis, China knows that Obama is a whimp.   They would probably back down – if they thought we had a president with a backbone.

Of course to be fair to Obama, he did sign that treaty with Russia cutting our nuclear weapons and he has extensive plans after his re-election to cut our nuclear arsenal even more.   It is kind of hard to threaten a bully with a stick.

But if China wins this round – in a couple of years they may well be parked off the coast of Virginia.

← A New Low – Even for Obama
Forward more jobs to China →