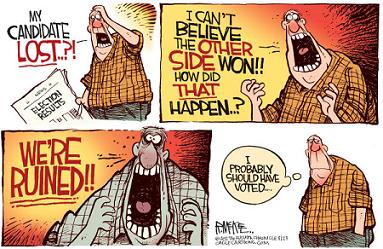 The revelation of America’s true character in November: What will it be?  And, what impact will you have on it?

November’s national election is shaping up to a true test of the character of our nation.  On November 6th, our choice between candidates will determine whether we continue down a path of destruction or choose a path that leads to economic and social restoration, here at home and abroad.  Are we a lasting  beacon of freedom for the world, or are we just another country that worked well for a while?

The incumbent administration continually apologizes for our successes and seems to prefer we do not have any more.  The White House celebrates victimhood, punishes productivity, mandates preferred behavior, shifts blame, denies responsibility, and uses politically correct language to cover the transgressions of those seeking to destroy us.  The only promise this administration seems intent on keeping is the one to drive our coal miners and the coal industry out of business.  In so doing, along with denying our applications to drill and explore for other domestic resources, they are making us ever more dependent on those who hate us; funding their very efforts to destroy us.  Does any of that reflect the content of your character?  I doubt it.

According to this White House, our enemies successful plan to attack our Libyan Embassy on 9/11/2012 was because of a practically unseen YouTube video.  In reality, they knew it was a planned attack, with a sustained intent of getting the “Blind Sheik” and other terrorists released by the US.  The administration (including the President himself) knowingly repeated this false representation even after the White House Press Secretary acknowledged the truth of the situation.  How does that have a positive impact on our national security? It doesn’t, and it reflects poorly on the very character of our nation.

Our once proud and productive NASA’s purpose has been reduced to primarily making the Islamic world feel better about its contributions to the advancement of mathematics.  This is in furtherance of their strategy to be apologetic and deferential in our very successes.  Well, I am tired of it and am counting on your help to bring about real change.

Mitt Romney and Paul Ryan will not be apologetic for America’s status as a lasting beacon of freedom.  They will fight to restore our nation economically, not try to drive essential and productive industries out of business. They will support and promote good over evil in this world, and restore the internationally damaged view of our nation’s character.  They will not promote and celebrate victimhood, but will reflect a proper compassion for those in need and support policies that promote strong families.  They understand the need to reduce our nation’s irresponsible runaway spending, reduce the size and scope of government, and allow our citizens to be productive in their personal, community, and commercial endeavors.

I believe America’s truly great character will shine through at the polls November 6th by choosing to elect Romney/Ryan over Obama/Biden.

Many in the media have said that September was a bad month for the Romney campaign.  If a month in which Romney/Ryan continued to gain ground in nearly every demographic and is now in a dead heat in the polls of likely voters is considered a bad month, I’ll take another one just like it.  Signs and bumper stickers are flying out the doors of our campaign offices to cars and yards around the state – while our opponents have plenty of such material nestled safely,  undisturbed and unwanted by the community.

Thank you for all your hard work on this  campaign.   It is local leadership and grassroots efforts around the state that will take us to victory.  No one cheerleader or titled letterhead can claim credit for our victory this Fall, but every single one of you and your labor is necessary for success.  So, keep assembling and putting up signs, making phone calls, knocking on doors, and talking to  family, friends, co-workers, and neighbors.  With your help, we will win in November.