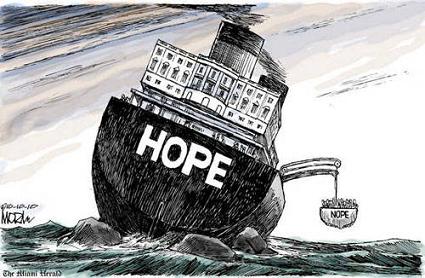 In 1988 Democrats passed, with a veto proof margin, the “WARN Act” requiring corporations to warn their employees 60 days in advance about the potential for  layoffs.   But, hey, what’s the value of a federal law if it interferes with Obama’s re-election campaign?

Obama’s panic began in June when Lockheed Martin of Virginia said that the company was considering sending out potential layoff notices to all of its 123,000 employees.

In July, The Department of Labor issued “guidelines”  calling it “inappropriate” for contractors to issue notices of potential layoffs tied to sequestration cuts.   But a few of those contractors said they are would still consider obeying the law.   So Friday, when no one was looking, the Office of Management and Budget raised the stakes.  Contractors will now be compensated for any legal costs incurred if layoffs happen due to the cancellation of their contracts under sequestration.  It is a “you scratch our back and taxpayers will cover your butt” deal.  Unfortunately, no one asked the taxpayers.

Senator John McCain, bless his little progressive heart, said that Obama is cynically “trying to skirt the WARN Act” to keep Americans in the dark until after the elections.  You think?

Now that the government has saddled taxpayers with any potential  legal costs for not following federal law, Lockheed has backed down.   Of course I can hardly blame Lockheed.  If they defied the Democrats and Obama wins re-election, they probably will never get another federal contract or God forbid, like GM, become Government Lockheed Martin.

So once again, subverting federal law is okay if you happen to be a Democrat and want to win re-election.

Now, it is up to the rest of us to let employees working on federal contracts for the Defense Department know that they may well be unemployed if Obama wins re-election and Congress doesn’t get off their collective butts and get to work.

← Don’t Worry Coal Miners. Obama says McDonald’s is Hiring
November Is The True Test Of The Character Of Our Nation →