It is time to end the unemployment shell game.  The government has played around with the pea for so long, they don’t have any idea where it is. 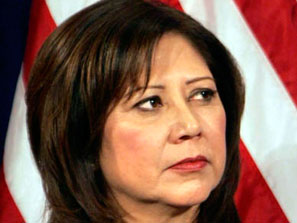 The Bureau of Labor Statistics reported that there were only 114,000 new jobs created in September which should have created a rise in unemployment from 8.1% to 8.2% but according to  government “new math,” unemployment dropped to 7.8%.

New math can be  complicated.  You first have to take the July and August estimated jobs created and re-estimate an  86,000 increase,  add that  to the estimated 114,000 new jobs created in September, and then  estimate that at least 600,000 people found part-time work at McDonalds  and like magic, unemployment drops.

Labor Secretary Hilda Solis was slightly upset that no one actually believed unemployment fell!  “I’m insulted when I hear that because we have a very professional, civil service organization where you have top, top economists that work at the Bureau of Labor.  They’ve been doing these calculations.  These are – these are our best trained and best-skilled individuals working in the BLS, and it’s really ludicrous to hear that kind of statement, and I say that because just look at the – we have to look at what happens across the board, not just in one month, but look what happened in the last two months.  We also saw revisions there upwards of 86,000 additional jobs added and this brings us now to 5.2 million private sector jobs across the board, we saw 104 private sector jobs created. . .I will tell you that we look at each report differently.  We just saw revisions for the last two months and this happens.   I mean, these are estimates that obviously the BLS puts out.  They do the best calculation, using the best measurements and tools and we’ve been using them for the past 70 years.  We haven’t changed anything and the information that I received is given to me by our professional, civil service staff in the BLS.”

Somebody get that woman a teleprompter.

Unemployment data is collected over a one week period by census workers via phone and  home visits.  It is about as accurate and precise as those campaign ads we have to endure hourly.    Then that  data is presented to those “very professional” BLS employees to play with.   They would have dropped it to under 5% if they thought we would have bought it!

The real unemployment rate, which includes those who have given up trying to find some of the estimated jobs created, and those estimated to be  flipping burgers at McDonalds, is the only thing that matters and it remains unchanged at 14.7%.

← Are There Limits To Sexual Freedom?
Take A Walk With Obama →