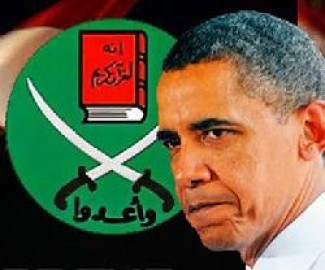 A year long investigation by the Investigative Project on Terrorism (IPT) discovered that scores of known Muslim radicals have made hundreds of visits to the White House, meeting with Obama’s top officials.

Court documents and other records have id’d many of visitors as belonging to groups serving as fronts for the Muslim Brotherhood, Hamas and other Islamic militant organizations.

Among the visitors to the White House were officials representing groups that have been designated by the Justice Department as unindicted co-conspirators in terrorist trials,  groups that have obstructed federal investigations; groups that promote the incendiary allegation that the U.S. is engaged in a “war against Islam;” and groups that claim that many of the Islamic terrorists convicted since 9/11 were framed by the government as part of an anti-Muslim profiling campaign.

Individuals from the Council on American-Islamic Relations (CAIR), who in 2008 was listed as an unindicted co-conspirator in the largest terrorist money laundering case in U.S. History (Holy Land Foundation), have visited the White House at least 20 times since 2009.  While the FBI formally ended all contact with CAIR because of its ties to Hamas, Obama still welcomes them with open arms.

Omeish, at a sermon at Dar al-Hijrah, called for “an American Islamic movement that transforms our status, impacts our society and brings forth the change that we want to see.”

Elibiary condemned the convictions of the defendants in the Holy Land Foundation calling it a “loss for America” and then dismissed the prosecution as “a political trial trying to achieve a government policy.”  The Texas Department of Public Safety says Elibiary may have been given access to a sensitive database of state and local intelligence reports and shopped some of the materials to a media outlet.  Jihad Watch has an article on Elibiary. you may find interesting.

The Muslim Public Affairs Council (MPAC) has secured the closest working relationship with the Obama White House despite a record of anti-Semitism, whitewashing the terrorist threat and hostility toward law enforcement.  Fifteen MPAC officials have been welcomed by the White House.

Like CAIR, MPAC has pushed the “war on Islam” message.  MPAC defended the 1983 attack on the U.S. Marine barracks in Lebanon that killed 241 Americans and questioned the U.S. terror designations for Hamas.

In July 2011, Quinton Wiktorowicz on Obama’s National Security Council hosted private meetings with MPAC officials and two weeks later the “Empowering Local Partners to Prevent Violent Extremism in the U.S.” was issued.  MPAC has pushed for years to remove any reference to Islam from National Security Dialogue.  They also question U.S. support for Israel; criticized the Congressional hearings on radicalization within the Muslim Community; criticized NYPD’s surveillance of Muslim groups in the Northeast with “no evidence of criminal activity;” and criticized the FBI raids in Chicago and Minneapolis targeting the Popular Front for the Liberation of Palestine and th Revolutionary Armed Forces of Colombia, both designated terrorist organizations.

Other Islamists that walk the red carpet at the White House include:

Source: Act for America and Investigative Project on Terrorism

← Property Rights and The Rule of Law
Obama and Known Terrorists →