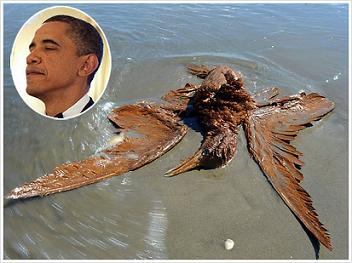 On July 6 Obama signed the Restore Act into law.  The Restore Act was created in the aftermath of the BP oil spill, for Gulf Coast restoration.  The law requires that the Secretary of the Treasury deposit into a special trust 80% of all administrative and civil penalties charged against BP.   According to the new law, the trust would be ultimately distributed to special committees established by each Gulf Coast state, according to a set formula.

Several news outlets are now reporting that Obama is negotiating with BP to reduce civil penalties.  If that isn’t bad enough, the settlement would reallocate monies from the special treasury “trust fund” to the Natural Resource Damage Assessment (NRDA) to be focused on environmental damage such as the marshes of Louisiana rather than on major economic damages to tourism, fishing, etc.  for the balance of the Gulf Coast.  Florida, Mississippi, Alabama and Texas would be left out in the cold.

The real purpose of these negotiations isn’t environmental concerns.   Monies sent to the treasury for the Restore Act  trust fund are not tax deductible but – surprise – monies sent to the NRDA are.    Rep Jeff Miller said he finds it “repulsive that the President would attack Big Oil during the debate, all the while knowing that the Justice Department is negotiating a settlement with BP that could give the oil company hundreds of millions in tax credits.”

Honestly, I don’t understand why anyone would be surprised by the deal.   BP, its subsidaries and employees are major donors to  Obama’s  campaign.  And usurping the Constitution or Congress is nothing new to Obama.

I found it interesting that in 2010 the LA Times found another link to BP in the form of Rahm Emanuel who lived rent free for 5 years in an apartment owned by Rep. Rosa Delauro of Connecticut and her husband Stanley Greenberg.  Greenberg’s consulting firm was one of the architects for BP’s rebranding campaign to associate itself as a “green” oil company.   Coincidence?  I doubt it, in Washington one hand is always in the pocket of another.

Obama’s blatant disregard for the law – even those laws he signed – is Standard Operating Procedure for this administration.  Obama recognizes no authority but his own!

← Obama and Known Terrorists
Our Wallets Need A Break →