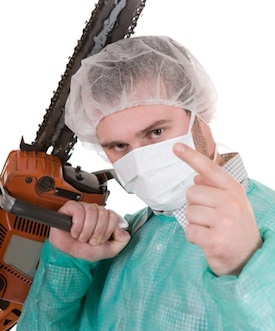 A new study is promoting male castration.   Just check out the benefits.

How hard could it be?

Circumcision is a form of castration, at least according to Hillary Clinton.  When speaking at the International AIDS Conference she “suggested” that circumcision would control the spread of AIDS in under-developed nations.  They’re already forcing it upon the men in Africa under the guise of women’s rights and the U.N.’s International Criminal Court is sentencing men to be circumcised as a “humane effort” to stop bad behavior.  It is only a matter of time before “humane circumcision” becomes “humane castration”.

Don’t be so antsy.  You’d be saving the world! And the United States Government is behind you all the way.

Kathleen Sibelius at the Department of Health and Human Services has mandated that minor children be given free access to contraceptives and healthcare coverage for sterilizations/castrations and abortions,  without parental consent.

The Guttmacher Institute insists that parental consent, for such “minor decisions” on a child murdering her unborn child, or  a young boy or girl submitting  themselves for sterilization/castration, is not needed.   I would expect the joys of castration will now become part of Sex Ed.

Never heard of the Guttmacher Institute?  Well they are the research arm of Planned Parenthood – named after former Planned Parenthood president, Alan Guttmacher who just happens to be the nephew of the former Vice President of  the American Eugenics Society, which by the way, still exists today under the name of the Society for Study of Social Biology.

The Society is joined at the hip with the United Nations.  At a symposium in England, R.G. Wilkinson discussed at length, the link between healthier populations and the redistribution of wealth.  Environmental Justice, Population Control and Social Justice go hand in hand.

Welcome to the War  Aganst Men!