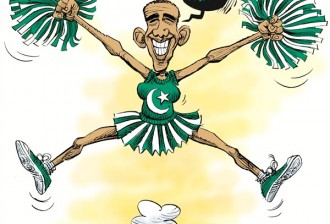 In Conor Friedersdorf’s article “Why Do Liberals Keep Sanitizing The Obama Story?” he goes after Jonathan Chait of the New York magazine, who wrote a 5000 word essay to defend Obama’s first term.

How could anyone defend Obama’s foreign policy, national security or homeland security?   According to Chait Obama “has enjoyed a string of foreign policy successes – expanding targeted strikes against al Qaeda, killing bin Laden, ending the war in Iraq and helping to orchestrate an apparently successful international campaign to rescue Libyan dissidents and then topple a brutal Kleptocratic regime.”    Where to start!

By taking action in Libya, Obama violated the War Powers Resolution ignoring both Congress and legal advice from his own counsel.  Obama did not kill bin Laden – he  whined for two years before allowing  the Navy Seals do it.   If he got us out of Iraq why have Special Forces  returned?  And, he didn’t end the war in Iraq – he retreated,  and then  announced to terrorists worldwide that he plans on retreating from Afghanistan in 2014.

Why is the U.S. supporting a pro Iranian Shite regime in Iraq against a Sunni based insurgency while at the same time supporting a Sunni led movement against Syria?   He brings the Muslim Brotherhood into the White House while refusing to even meet Netanyahu.  Then he gives an interview on 60 Minutes where he calls Netanyahu’s legitimate concerns about  Iran “noise.”   He has allowed Trita Parsi, a pro-Iranian lobbyist,  to set U.S. policy on Iran.  He lied to voters about terrorist involvement in the Libyan attack on our embassy to cover up the fact that he and Hillary have blood on their hands.

He insulted the UK by returning a bust of Winston Churchill.    He negotiated a treaty with Russia to cut our nuclear arsenal because he couldn’t “morally” ask Iran to not develop nuclear weapons unless the U.S. made cuts.    He  has plans during his second term to further weaken our national security, not only by cutting the military but by further cuts to our nuclear arsenal.

On the home front Obama can’t bring himself or allow anyone in the government to use the word terrorist except to describe those American citizens who have criticized him and his power grab. He even managed to put the face of workplace violence on a terrorist attack against Fort Hood soldiers.  Obama has put American citizens on a secret kill list and now has the power to arrest Americans  and detain them indefinitely without due process.  He is making deals to release  Gitmo prisoners back onto the battlefield in an effort to appeave far-left voters.

And let’s not forget the  National Security Agency’s new Utah spy center, code name Stellar Wind which will be used to amass personal data on all U.S. citizens while sanctioning  illegal aliens to run rough shod over our laws, collect tax refunds from the IRS and receive “free” medical care.

Obama and his want-to-be Hillary Clinton are cutting deals with the United Nations to disarm American citizens while cheerleading for the Muslim Brotherhood.

Obama is out to destroy America and if you have doubts, go see 2016 and then watch the video “Dreams from My Real Father.”