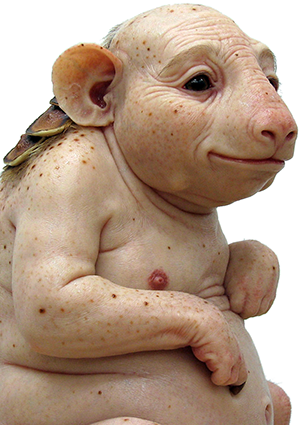 The UK Daily Mail  reported that scientists in the UK have created more than 150 human-animal hybrid embryos secretively over the past 3 years.  The revelation comes just one day after a committee of scientists warned of a nightmare “Planet of the Apes” scenario in which work on human-animal creations goes too far.

These grotesque creations came about thanks to the 2008 Human Fertilizataion Embryology Act which legalized the hybrids ‘cybrids’ in which human nucleus is implanted into an animal cell and ‘chimeras’ in which human cells are mixed with animal embryos.

According to Lord Alton “at every stage the justification from scientists has been: if only you allow us to do this, we will find cures for every illness known to mankind.  This is emotional blackmail.  Of the 80 treatments and cures which have come about from stem cells, all have come from adult stem cells – not embryonic ones.  On moral and ethical grounds this fails; and on scientific and medical ones too.”

It is not just the UK involved in these creations.  The Washington Post report “Of Mice, Men and In-Between“ published in 2004,  stated that in Minnesota pigs were being born with human blood in their veins; in Nevada there are sheep whose livers and hearts are largely human, and in California mice peer from their cages with human brain cells firing inside their skulls.  Biologists call these animals chimeras after the mythical Greek creature with a lion’s head, a goat’s body and a serpent’s tail.  They are products of experiments in which human stem cells were added to developing animal fetuses.

In the Minnesota experiment at the Mayo Clinic, scientists  created human-pig chimeras by adding human blood forming stem cells to pig fetuses.  The result were pigs with both human and pig blood in their vessels.  If that isn’t bad enough, the human and pig cells merged creating hybrid cells.  At the University of Nevada at Reno scientists have been adding human stem cells to sheep fetuses which produced sheep with livers that are up to 80% human.   Stanford University’s Institute of Cancer has been injecting human neural stem cells in mouse fetuses creating mice whose brains are about 1% human.  They are considering making chimeric mice whose brains are 100% human.

While a more radical experiment would be to inject human stem cells into an animal embryo and then transfer that into an animal’s womb, Scientists suspect the human cells would spread throughout the animal embryo as it matures into a fetus and integrate themselves into every organ.  The risk is that some human cells would find their way to the developing testes or ovaries where they might grow into human sperm and eggs and if two such chimeras were to mate, a human embryo might form.

A report “Animals Containing Human Material” says that genetic and stem cell technologioes are now so advanced that the creation of an animal with a human brain is already on the horizon but no country has yet devised a broad regulatory framework for the research.  “We don’t want scientists to cause problems for the future by overstepping the mark of what is publicly acceptable.”    According to the report the creation of a non-human primate with enough human brain cells to make it capable of human-like behavior should be off limits for now.  The report said that such animal might be able to develop human capacities such as reasoning or self-awareness, which would have a moral status close to our own or to that of the great apes which could not be used for invasive research in most countries.    The breeding of animls that have human derived sperm or egg cells should also be banned as it could generate a true animal-human hybrid.

The report also said that other ethically sensitive research could go ahead if approved such as  modifying the brains of animals in ways that might give some human-like functions; generating or propagating human-derived sperm or egg cells in an animal in which there is no chance of fertilization; and creating an animal with some obvious human like characteristics such as human skin or speech.

In 2003 researchers at Shangai Second Medical University in China  successfully fused human skin cells and dead rabbit eggs to create the first human chimeric embryos.  In 2006, UK researchers at Newcastle University and King’s College actually applied for a license to fuse human DNA with cow eggs.   Researchers at the University of Nevada School of Medicine created sheep with 15% human cells in 2007.  As early as 1984 a chimeric ‘geep’ (goat/sheep) was produced.   From 1924 to 1930 Ilya Ivanov tried to impregnate female chimpanzees with human spern  to create a human chimpanzee hybrid he called a humanzee.

No matter what regulations you place on this type of research, there will always be those who are willing to take it to the next level.  Supporters of this research are crossing a moral divide.   How far will these experiments go before common sense prevails?

Toto, I don’t think we are in Kansas any more!

← THE WAHHABI INVASION
Are There Limits To Sexual Freedom? →