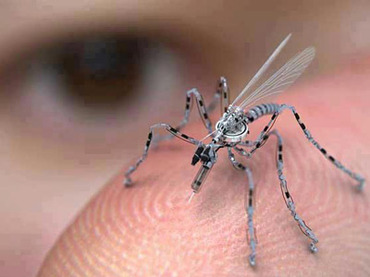 The FAA Authorization Act signed into law just this year has opened the door for unmanned drones to take over the skies over America.  Obama has called for drone technology to be integrated into the national air space by 2015.  By 2020 it is estimated that at least 30,000 drones will be in the air operated by governments and corporations.

These drones are a threat to privacy and security and are being unleashed upon American citizens without any protocols to protect our rights and our freedom.  Many drones are designed to carry surveillance equipment such as video cameras, infrared thermal imagers, radar and wireless network “sniffers.”

These devices, which are capable of videotaping the facial expressions of people on the ground from hundreds of feet in the air, will usher in a new age of surveillance.  No person, whether he is at a political rally, exiting a house of worship, or simply walking around, will be safe from the prying eyes of these drones,  some of which are as small and agile as a bee.  And if you think being indoors will save you – these drones can be equipped with technology capable of peering through walls.  Drones can also be equipped with anti-personnel weapons for domestic use such as automatic weapons, tasers, tear gas, rubber buckshot, and grenade launchers.

Aside from privacy and civil liberties issues, there are safety issues involved.  According to David Zucchino of the LA Times, “The U.S. military often portrays its drone aircraft as high-tech marvels that can be operated seamlessly from thousands of miles away.  But Pentagon accident reports reveal that the pilotless aircraft suffer from frequent system failures, computer glitches and human error.”

In March 2011, a drone predator parked on a remote base in Djibouti in Africa started its engine without any human direction, even though the ignition had been turned off and the fuel lines closed.  Technicians concluded that a software bug had infected the “brains” of the drone but never pinpointed the problem.  How many other drones have been infected and how easy is it implant a bug into the software?

Drones can also be hacked into or hijacked.  In 2009 Shiite insurgents hacked into Predator drones with software that cost only $26, giving them access to video footage shot by American spy planes.  A technically proficient hacker in America would gain access to a wealth of information about your personal lives, your home and your family.   You can only imagine what a terrorist could do with a fully armed remote controlled guided missile – which is what drones really happen to be!

Without proper safeguards, rules and regulations, law enforcement agencies will find a whole host of clever and innovative ways to use drones to invade our daily lives and wreak havoc on our freedom.  The ability of these drones to collect information is almost unlimited and if we allow it to happen we will have accepted the Orwellian vision of “Big Brother.”

The Rutherford Institute has sent a letter to all 50 state legislatures asking them to adopt a “Freedom From Drone Surveillance Act” such as the model legislation they have out lined.   The proposed Act would prohibit state governments from using data recorded via police spy drones in criminal prosecutions and prevent police agencies from using drones outfitted with anti-personnel devices.  It will protect privacy rights, First Amendment rights, and protect against Fourth Amendment violations.

Now that the national election is gearing down, it is time for Americans to turn their attention to their state governments.  The safety and privacy issues posed by drone technology is a bi-partisan concern.   The potential use of drone technology to spy on our everyday lives is unlimited and poses a serious risk to our freedom and civil liberties.  It is imperative that our states enact legislation, in line with the  U.S. Constitution, to protect our privacy, our safety an our civil liberties and to ensure that these will not be jeopardized for the sake of expedience, economy and security.

It is never too early to contact your local state representative and ensure that he gets behind the adoption of  state rules and regulations to protect our rights!  Forward him a copy of the “Freedom From Drone Surveillance Act” today.

← The Kill Matrix
Secret Service ask you to snitch →